“By the third act the film runs out of ideas and grinds to a halt by relying on the usual genre formula endings.”

A quirky black-comedy thriller. Regular collaborators Dan Berk and Robert Olsen (“Body”) write and direct it. The festival film at the recent SXSW in Austin was mostly well-received by the viewers and critics. Maika Monroe and Bill Skarsgaard play a dumb young couple of petty criminals, who are lovebirds. They wish to have a fresh start in life and try to reach Florida to begin a seashell business. They make their way there by robbing convenience stores and gas stations. After one such station robbery, they run out of gas in an isolated spot in the sticks. They walk to find an empty house nearby and break into it. They wish to steal the new car in the garage. While searching for the car keys, the lovebirds discover a mute young girl, Sweetie Pie (Blake Baumgartner), chained up in the basement. But the psychopath homeowners, Jeffrey Donovan and Kyra Sedgwick, return before they can free the girl. Even if the lovebirds are armed with a gun, the crazy older couple overcome the home invaders and put them in bondage. Complications arise, as plot twists become the norm. The price paid for the thriller’s unpredictability is the pic goes bonkers and becomes too silly to take serious, even if funny and entertaining. The urge for comedy prevails over building tension, in this cult-like film, where the over-the-top performances by both criminal couples gives the thriller its energy. The film takes place mostly in the rural house. It effectively uses the house in its best sequence of Monroe climbing through a laundry shoot. By the third act the film runs out of ideas and grinds to a halt by relying on the usual genre formula endings. 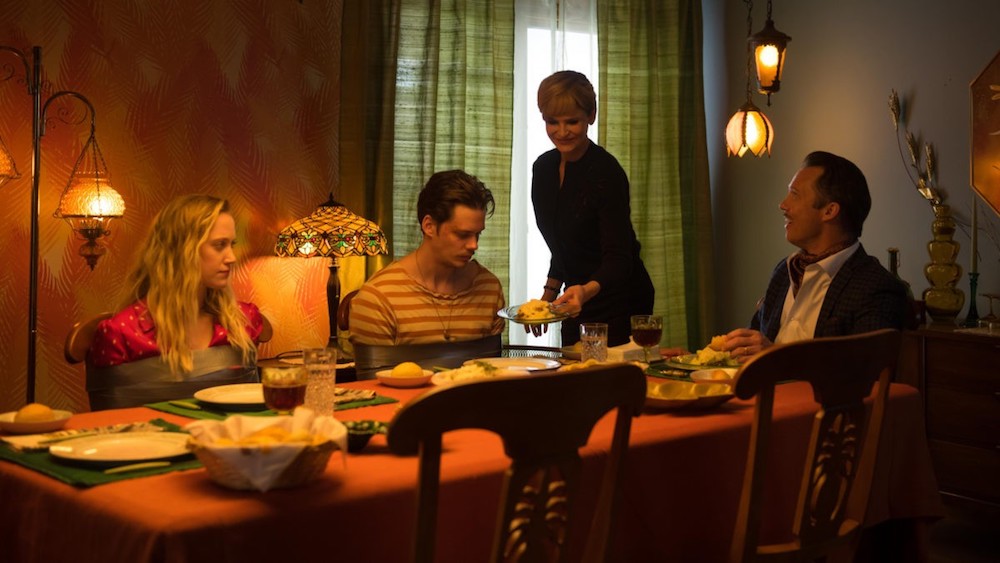