Sadistic crime drama that rings hollow. Nicholas Roegg walked off the set after a few days and was replaced by Elliot Silverstein (“Cat Ballou”/”A Man Called Horse”), who couldn’t deal with the unsavory material and comes up with a safe film that’s a dud. Writer S. Lee Pogostin adapts it to the screen from the tawdry novel by Lawrence Block. It was filmed in Louisiana. Just returning from the Viet Nam War is Northerner David Webb (Dack Rambo), who marries the New Orleans heiress Jill Binghamton (Rebecca Dianne Smith).

The excited newlyweds wish to be alone and flee her pursuing family to stay in a New Orleans hotel. The bride’s family have this obnoxious custom of standing under the honeymoon couple’s hotel window and serenading them all night until the marriage is consummated. After escaping the family on a country road, the couple stop for an evening swim at a pond and consummate the marriage in the woods. Unfortunately they witness a murder by the psychopath Lee (John Beck) and his hit man partner Sandy (Roy Jenson). When David is knocked cold, the killers off screen rape the bride and then let them go onto New Orleans.

The angry David, once in New Orleans, seeks revenge and tracks down the killers and kills them. I gather the film’s point is don’t mess around in the woods to consummate your marriage when you can do it in a bed in a luxury hotel. 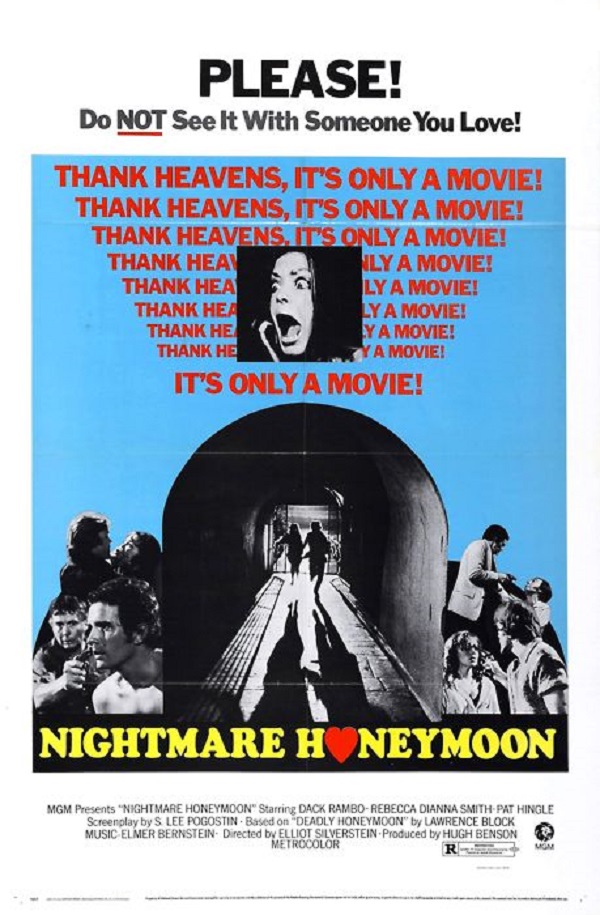