“It’s a decent film for the singing cowboy, who seems to enjoy singing a number of tunes as much as he does chasing down the bad guys.”

Joseph Kane(“Laramie”/”Dakota”/”Flame of Barbary Coast”) directs a typical Republic studio cheapie Roy Rogers B-Western effectively, and shoots it in b&w. It’s based on a story by Norman Houston and is written by him and Gerald Geraghty. It’s a decent film for the singing cowboy, who seems to enjoy singing a number of tunes as much as he does chasing down the bad guys.

In southern California, in Old Caliente, at a time California joined the union in the middle of the 19th century, Roy Rogers is a ranch worker to wealthy Spanish nobleman Don Jose Vargas (Frank Puglia), and returns from a successful two-month cattle-drive with gold. The untrustworthy “half-breed” foreman, Sujarno (Frank La Rue), tells gringo bandit Calkins (Harry Woods) about the gold and sets up the robbery by the gang, and then frames Rogers and, his just arriving from Iowa wagon master friend, Gabby Hayes. Don Jose locks them both in the cellar of his ranch and plans to hang them, but Don Jose’s more educated daughter, Rita (Katherine DeMille), just returning from Europe, listens to Gabby’s niece Jean (Mary Hart) plea for understanding and gets her father to at least listen to Roy’s story. But the sneaky Sujarno kills Don Jose, and the prisoners flee. When Don Jose’s son catches up with the innocent pair, Roy convinces him of Sujarno’s guilt and they set a trap to catch both the crooked foreman and the outlaw gang. 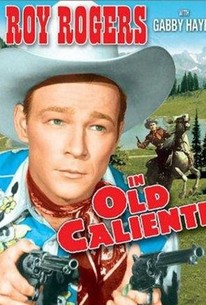