Belgian filmmaker Chantal Akerman (“Window Shopping”/”Golden Eighties”/”Je Tu Il Elle”) is one of the best contemporary female directors, if not the best. She’s on top of her game in this engaging erotic drama; it’s cowritten by Ms. Akerman and Pascal Bonitzer. Akerman makes the most from this almost trite ménage-à-trois among young lovers in Paris. What it lacks in depth, it celebrates in the strength of a woman who shoots for experiencing true love and is strong enough to realize by the conclusion that her immature men lovers are too possessive to find such love. It reminds one of Truffaut’s “Jules and Jim.”

Country bumpkins Julie (Guilaine Londez) and Jack (Thomas Langmann) are recent residents in Paris; they live in a bare small flat, do not socialize, have no friends and no phone, saying that next year they will get around to those things. The lean, laconic and handsome Jack works nights driving a cab, while the stringy-haired well-proportioned Julie walks the streets alone at night sightseeing the touristy spots of Paris. During the day, they shun sleep for lovemaking. At the end of a hot summer day, Jack introduces her to Joseph. The brooding lonesome young man drives the same cab during the day, and is aiming to one day own a cab. Tired of walking alone, Joseph is invited along. Soon they start making love and she keeps it from Jack. The guilt-free Julie loves both men and refuses to give up either, as they not only lookalike but complement each other by each having personalities the other is lacking. Akerman in a wry comical way forces Julie to be true to herself by choosing one of the lovers, which occurs in a realistic but not totally satisfying way at the climax. Julie at last tells the unsuspecting Jack of her romance with Joseph, which does not go over that well and leaves her walking away from both lovers at the end.

Though stylishly pleasing and provocative, it leaves a lot of unanswered questions in its morally ambiguous telling. It asks the viewer to understand where Julie is coming from and then to accept her passionate relationships as her way of realizing her sensual fantasies. We are led to believe that there can be nothing more important in the young people’s lives but living for love above all else. It is one of Akerman’s more interesting and affecting films, even if it might not please a wide audience it, nevertheless, sings out in a lyrical way with youthful excitement for both the night and day. 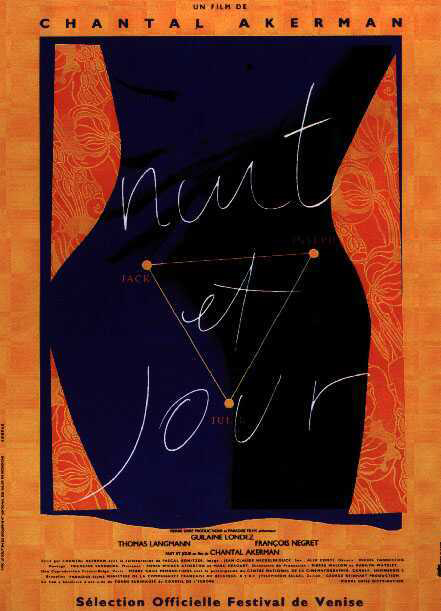