The 32-year-old Peter Sollett (“Raising Victor Vargas”) directs this slight teen romantic comedy for those hopefully looking in vain for another Martin Scorsese’s After Hours. It’s based on the popular novel by Rachel Cohn and David Levithan, and written by Lorene Scafaria. It plays out as a glossy teen fantasy of the Manhattan night scene, which is painted as a benign happy stomping ground for the obnoxious underaged characters depicted. It desperately tries to capture what motivates the current youth scene, but seems to be viewed by oldsters imagining they are teens. Though it lacks wit and scope, it still aspires to be the next Juno. Lot’s of luck, on that score! The musical sounds include works by Vampire Weekend, Bishop Allen, Devendra Banhart and Band of Horses.

On a night out in the Big Apple, the recently jilted lovesick Nick (Michael Cera), a sensitive geeky straight New Jersey high school senior who is a guitar player in an otherwise all-gay punk band called The Jerk Offs and has mixed special CDs for his unappreciative pretty but shallow girlfriend Tris (Alexis Dziena), feels depressed that he’s been dumped by her. Meanwhile the beautiful live wire egghead poor little rich girl from a private all-girls Englewood, New Jersey high school named Norah (Kat Dennings), the daughter of a famous recording industry big shot, recovers the CD that Nick mixed for Tris which she threw in the garbage with a snide comment. Norah falls in love with the CD mixer sight unseen because they share the same musical tastes.

Nick and Norah, in a meaningless gesture of homage, have the names of “The Thin Man” sophisticated protagonists, even though the story has nothing to do with that film series and is far from sophisticated.

The big night on the town has the two leads thrown together when Nick’s group plays a gig at a city hotspot and Norah is there and unexpectedly meets her nasty nemesis classmate Tris, who woofs her that she’s alone. A flustered Norah claims she’s with a boyfriend and thereby kisses the unsuspecting Nick, who was just standing around eyeballing Tris and flustered that she was with a hunk named Gary. Norah is surprised that Nick happens to be the geek Tris just dumped and the one she considers her musical soulmate. When Tris sees Norah with him, she has a change of heart and schemes to win Nick back. For most of the story, Nick and Norah are nervously driving around Manhattan in Nick’s yellow Yugo (mistaken for a taxi, which gets a lot of bad mileage out of the running gag of being constantly flagged down for a ride) to search for a rock concert by the hipster band called Where’s Fluffy that’s going to be taking place in a secret location. Tris drags dummy Gary along as she trails Nick by taxi and is also searching for the concert.

When Nick and Tris are somehow riding alone in his Yugo (don’t ask and I won’t tell how they ended up together), she tries to lure him by doing a provocative dance in the street to Hot Chocolate’s 1976 hit, “You Sexy Thing,” but our boy resists her allure and in an ungentlemanly move leaves her stranded on the dangerous 10th Avenue and tries to hook up again with his new squeeze Norah.

The supporting misfit characters offer some labored comedy bits, as the thin story is padded to take in their comic antics through various subplots during this long and excruciating night. Caroline (Ari Graynor), Norah’s drunken best friend, gets separated from Nick and Norah and in comedy relief bits wanders around various Manhattan nightspots looking for good places to throw up until she hits the jackpot by landing in the washroom of the Port Authority Bus Terminal. Also riding around in a van looking for Where’s Fluffy and trying to seal the deal with Nick for Norah are the leader of Nick’s punk rock band (Aaron Yoo) and the other two friendly band members Dev and Lethario. The loutish Tal (Jay Baruchel), the dim-witted sometime musical boyfriend of Norah’s, meets up with her in a Brooklyn nightspot and easily becomes the film’s second heavy. There’s also uninspired cameos from Andy Samberg of TV’s Saturday Night Live and John Cho, who plays Harold in the Harold&Kumar stoner movies.

Sollett’s tame vapid tale about two dullish but nice music-obsessed teens, who are into wearing hoodies, mixing CDs, iPods, cellphones and banal teen chatter, might appeal to its target youth audience but the rest of us will probably find it only tolerable for a teen flick. 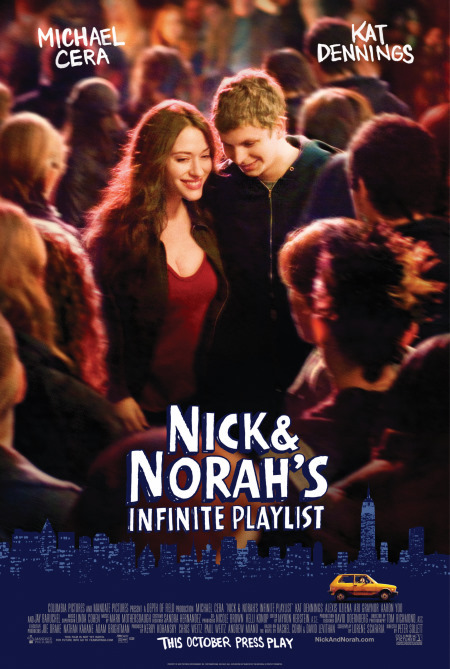