“Niagara Falls is cornball fare that takes the viewer down the falls in a barrel full of rube yuks.”

A badly conceived farce based on mistaken identity. It might not be the worst comedy I’ve seen, but is certainly not one of the better ones. Niagara Falls is cornball fare that takes the viewer down the falls in a barrel full of rube yuks. It’s presented as one of the short features executive producer Hal Roach, Jr. put together during his less creative period. The film was supposed to serve as a showcase for Roach protégé Marjorie Woodworth, someone who gives off Betty Hutton vibes. Gordon M. Douglas (“Saps at Sea”/”Girl Rush”/”The Great Gildersleeve”) helms without distinction this slight story, while Eugene Conrad and Paul Girard Smith turn in the lame screenplay.

Sam (Slim Summerville) and Emmy Sawyer (Zasu Pitts) are a middle-aged hick couple from Oklahoma, who come to Niagara Falls for their honeymoon. The nervous bridegroom is afraid to go up to their bridal suite and consummate the marriage in a biblical sense and instead gives his desirable room with a view to Margie Blake (Marjorie Woodworth) and Tom Wilson (Tom Brown), whom he believes are having a lovers quarrel he witnesses in the lobby; the meddlesome stranger wants to bring them together. In reality, Margie and Tom are strangers who met on the road, where he helped her fix a flat but was rebuffed when he came on as a wolf. She tells him she wants to get married young and have a lot of kids. The traveling salesman says he wants to sow his oats while young and is not interested in marriage. The opposites go their separate ways but he accidentally runs her off the road, badly damaging her car. A motorcycle cop tells them to spend the night in the Fall’s View Hotel and tomorrow to appear in court to straighten out the mess. Things become even more absurd when Sam can’t mind his own business, even after seeing the couple check out of the bridal suite and back into their separate rooms. He then pulls a loaded gun on the couple forcing them to kiss and makeup and stay together in the small room for the night. The next morning it’s discovered the couple was not married, and the hotel manager (Chester Clute), worried about the hotel losing its reputation as a respectable place, kicks the couple out along with Sam–he’s clad only in pajamas and a bathroom. We then find the chagrined Sam at Suicide Point telling a peanut vendor what he did and why he now wants to commit suicide. Hey, who could blame him; if I were in a turkey pic like this one suicide might be a good option. 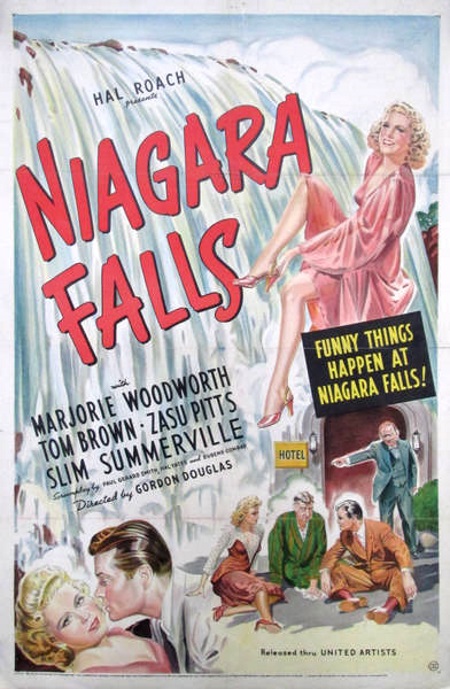