A timeless satire on television as a wasteland and how the corporate world of greed commercializes the news, as its only concerns are about ratings and not educating the public. It rings true today even more so than it did then. Sidney Lumet (“Prince of the City”/”Q & A”/”A Stranger Among Us”) pushes the borders of absurdity as he passionately stirs up the pot exposing the TV industry’s hypocrisy and demagoguery. Paddy Chayefsky’s powerful script, one of the best that Hollywood hasn’t screwed up, takes a long hard look at the network and how it destroys everything it touches. Network won Oscars for Paddy Chayefsky’s screenplay as well as for three of four acting categories — Dunaway for Best Actress, Peter Finch for Best Actor (in the only posthumous Oscar yet awarded), and Beatrice Straight for Best Supporting Actress, in one of the shortest-screen-time performances ever to win an Oscar.

Howard Beale (Peter Finch), washed-up dean of broadcasting at UBS, is canned because of poor ratings and goes on the air saying he’ll commit suicide on his final live show. He’s pulled from the air, but is given one more chance by the news programming head, his old friend, Max Schumacher (William Holden), not to go out as a clown and this time says life is bullshit. Surprisingly this gets high ratings and the ambitious, ruthless VP programming boss Diana Christensen (Faye Dunaway) convinces Frank Hackett (Robert Duvall), the network hatchet man who is only under the head of the conglomerate, Arthur Jensen (Ned Beatty), who happens to be just as loony as Howard except he owns the network, to put him back on the air as a populist messiah newscaster who has found God and tells it like it is as an angry man. The shameless executives believe the ranting madman Howard can save the network, which is ranked last among the big four. A board room battle ensues between old-fashioned Edward R. Murrow-like idealistic newsman Max and hardnosed realist corporate man Hackett, who has no problem with watering down the news into entertainment even further than it is now.

The flipped-out Howard goes on the air and says “I don’t know what to do about the depression and the inflation and the Russians and the crime in the streets. All I know is that first you’ve got to get mad. You’ve got to say: I’m a human being, god damn it, my life has some value! So I want you to get up out of your chairs. I want you to get up right now and go to the window, open it and stick your head out and yell — I’m mad as hell and I’m not going to take it anymore!” This “mad as hell” statement became a defining pop culture “moment,” and the highlight of the zany film’s take on the media.

It results in showing Howard’s fall and rise, and then his fall again.

Though hollow, too slick to be swallowed whole, filled only with vile characters and strident in its shrill message, the film hit a nerve with the public; and the commercial film even if it can be faulted for not going far enough in its criticism of television, the medium that caters to the viewer with a ten-minute attention span, nevertheless it must be applauded for at least saying something that mattered. 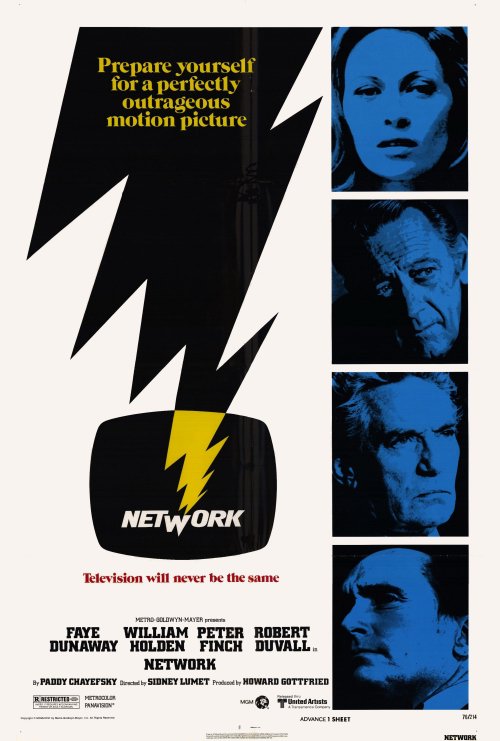