THE PORTUGUESE NUN (A RELIGIOSA PORTUGUESA)

Green tells of a young dedicated French actress, Julie de Hauranne (Leonor Baldaque), searching for her roots, whose father is French Basque and deceased mom Portuguese. The single Julie returns to Lisbon, a city she left at an early age for Porto and then grew up in Paris. Therefore she has little memories and no friends here. Julie comes to Lisbon for a few days to finish shooting a film with another actor, Martin (Adrien Michaux). It’s a film lifted from a nun’s love letters about Julie’s 17th century Portuguese nun, Mariana, who was seduced by Martin’s French naval officer. Besides the film crew, there’s only the director Denis Verde (Eugene Green, the film’s director). When not reading her lines, Julie behaves as a tourist strolling around the city and shows a fascination for the positive energy Lisbon gives off. Though she should be sad that she recently broke off a relationship with a French actor, Julie finds that on the contrary she is happy.

While walking around a garden area Julie befriends the lonely polite six-year-old Vasco (Francisco Mozos), an orphan, and in her short stay will speak with his kindly but harried guardian aunt (Beatriz Batarda) to learn why he isn’t at school and locked out of the house while she’s at work. Dining alone in a fancy restaurant, Julie encounters the suicidal middle-aged lonely-heart wealthy courteous son of Count Viseu (Diogo Dória) and gives him some temporary comfort so he can resume his peaceful life. Later Julie has a revealing dinner date with her low-key handsome married co-star Martin. When Martin returns to Paris, Julie is intrigued by the absurd romantic come-on of a local named D. Sebastião (Carloto Cotta), who is tagged by her because of his name as the reincarnation of a dead king from 400 years ago. Even the director, in the film within the film, half-heartedly tries to seduce her by taking her out for a night on the town. Julie’s most consequential and problematical encounter is with the God-stricken Sister Joana (Ana Moreira), who by day resides at the nearby convent but at night stays awake all night praying at the chapel near the hotel where Julie is staying. Their crisp exchange is a game-changer, as Julie groks what the Sister says that ‘we carry inside us the child of our love’ and as a result changes her aimless life and reaches for her true destiny.

Filled with artificial artifices, an absurdist wit, quirky conversations and bon mots such as ‘I always want to be what I am not,’ the sincere arthouse pic, lovable despite all its religious ploys, suggests we’re all tourists in the ever changing world, that art and religion must merge with life and that God’s truth can be delivered in unreal things just like it can be in a movie. Thereby the actress playing the nun for a movie is just as real in her role as the real-life nun. … It makes sense to me, and registered. 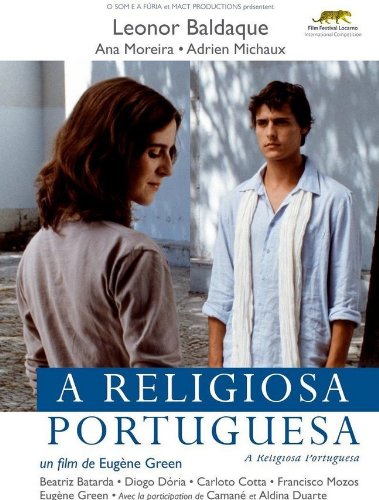