Portuguese auteur Pedro Costa (“Colossal Youth”/”Ossos”/”In Vanda’s Room”)in this fascinating minimalist black-and-white music documentary, ably paints a mesmerizing portrait of French actress-turned-singer Jeanne Balibar as an intense chanteuse who has an unswerving devotion to her craft and whose reedy voice is used to advantage. The gist of the pic captures her as she records a moody rock album and is in rehearsal for Offenbach’s comic opera La Perichole, while accompanied by guitarist Rodolphe Burger and while an off-screen unnamed voice coach corrects her. The singer is photographed in chiaroscuro with mostly her face half-hidden in darkness or in a deep-focus long shot of her writhing slowly far off from the camera.

It’s good aesthetic stuff that tries to look into Balibar’s soul as she sings and to come up with a hidden story about her that has not been exposed before. If anything, by paying such close attention to her applying hard work to perfect her craft, it gives you a sympathetic portrait of the artist as she embraces the trials, the open-mindedness, the discipline and repetitions it takes to master the creative process. It’s a film where measured silences gain importance in conveying meaning to the creative process as much as do the lyrics, as it is with any good piece of music.

The film uses only footage taken during musical rehearsals, recording sessions, and live performances. As an actress Balibar worked in films by noted directors Olivier Assayas and Jacques Rivette. How much you like the pic might depend on what you thought of her performance. Since I was taken with it and responded warmly to the intelligence of her songs and of the avant-garde atmospheric way it was filmed, I came away feeling drawn into its drone-like mood it set and felt unexpectedly exhilarated even though the concept was so sleep-inducing. 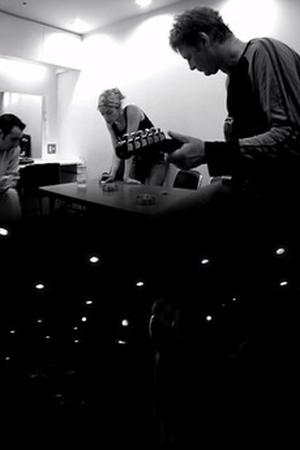 ON THE BEACH AT NIGHT ALONE