An irresistible documentary that makes Paul Bowles, an inaccessible major literary figure of the 20th-century, accessible to a wider audience than his usual cult or bohemian following. If you ever wanted an introduction to this unique thinker and his influences, this is as good a film as any to do that. It’s directed by Catherine Warnow and Regina Weinrich (who met Bowles in 1986 while in Tangiers teaching a creative writing course), who tell what they can of the 84-year-old avant-garde American composer-author–covering a lot of territory in this short presentation of 57 minutes. It starts out with Bowles telling of his lonely childhood and that his dentist father discouraged him from playing the piano or writing. Then tells of his apprenticeship as a musical composer under Aaron Copland, and how he wrote incidental music for the plays of Tennessee Williams, music for Lillian Hellman and a ballet score for Salvador Dali.

It’s filmed on location in Tangier, Morocco, where the American expatriate has lived permanently ever since 1947, his lesbian writer wife Jane Auer Bowles moved there a year later (she died in 1973, and had a stroke in 1955 which Bowles attributes in part to her evil Moroccan lesbian lover and her ability to perform black magic). Bowles chose Tangier only when it was suggested to him by his mentor Gertrude Stein, whom he met in the 1920s when he escaped New York City to live in Paris and remained friends with her throughout her lifetime. Stein curtly told him he wasn’t a poet and should turn to prose, and he had no trouble following her advice.

Highlights of the film include rare archival footage and photos, Bowles explaining things about his novels and reading excerpts from a few of his 20 books and 50 short stories that include “The Spider’s House,” “The Delicate Prey,” “The Sheltering Sky” and “Let it Come Down,” interviews with devoted friends such as poet Allen Ginsberg (calling him “a caviar writer”), composer Ned Rorem (telling of taking mescalin with Bowles), and poet Edouard Roditi (shedding insight into how Bowles perceived the world around him, preferring to stay out of the real world); and, the best part of the film, Bowles passionately talking about his writing: how he appreciates a good sentence, writing from his subconscious in what he calls automatic writing and how he wrote his first novel The Sheltering Sky under the influence of kif (Moroccan marijuana). There are also wonderful intimate stories Bowles relates about Gertrude Stein (calling him by his middle name Freddy because he wasn’t romantic like a Paul should be), Leonard Bernstein (telling of how he fears success would never come to him in the classical field and that he might change his name and switch to pop music), Tennessee Williams (worried he was going to die because he felt heart vibrations, and how he hated Morocco), Truman Capote (knowing far ahead what his writing plans were, as opposed to Bowles who worked spontaneously) and William S. Burroughs (writing his Naked Lunch by tossing each page of the 200 page manuscript on the floor and stepping over it, which was only put together by Ginsberg). The biographer of Jane, Millicent Dillon, tells of the tensions over their marital arrangement and how they helped each other creatively, but how Jane declined as a writer over time due to her self-destructive habits and alcoholism.

It’s easy to see how Bowles is the complete outsider, a man preferring not to talk about his Arab men lovers and accepting his solitude as if it were a gift from the gods but who in his prime entertained the movers and shakers of the literary world who made it a point to visit him in Tangiers. Bowles says he has lived without a telephone in his house since either 1969 or 1959 and that he chooses to be just as much of a loner now in his golden years as he was as a child, and has contact only with those who serve him meals and drive him to town for appointments.

Through the years I have read most of Bowles’ books and consider him to be one the world’s great writers. This film should give one a rough idea of what they are getting into if they choose to read him, which might be the best way to know him after all. 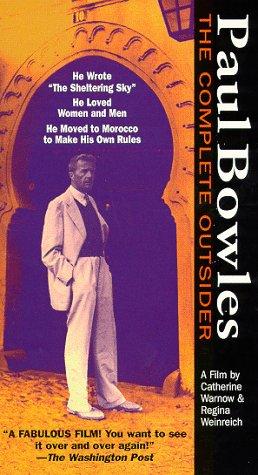