NAME OF THE ROSE, THE (Name der Rose, Der)

“This real monastery looks as if it were designed by the artist M. C. Escher.”

William of Baskerville (Sean Connery) and his novice, Adso of Melk (Christian Slater), arrive in 1327 in a remote Benedictine abby of northern Italy. The abby is a gloomy place with secret passages and dark corridors; it is located on top of a steep hill and the first news these two Franciscan brothers who are guests of the abbott (Lonsdale) hear, is that one of the monks mysteriously died. So begins this Gothic mystery, based on Umberto Eco’s witty novel.

William is an intellectual, possessing a razor-sharp wit, with a Sherlock Holmes approach to deducing mysteries in a rational manner, and a dark secret from his past. He is asked to investigate by the abbot, what turns out to be a series of murders. Everyone could be considered a suspect in this monastery, a place that is dedicated to eliminating laughter and joy — all in the name of a stern God. For the monks, without a fear of God there would be no reason to dedicate their lives to him. All the monks look grotesque and devilish, their tonsured heads make them look as if they were hired straight from a Fellini film. They are a superstitious lot and believe that the Devil is responsible for the crimes.

When his dumbfounded novice is revolted by this place, William wryly comments “Have you ever known a place where God would have felt at home?”

The story is chaotically told, making it difficult to keep track of what exactly is happening. After one monk is found dead at the base of the tower, William thinks that is a suicide. When another is found in a vat of blood, another drowned in a wine vat– and all of the victims bear an ink stain on their forefinger and tongue, William knows these new deaths are murders.

This real monastery looks as if it were designed by the artist M. C. Escher. It is where William of Baskerville must stealthily move about in its labyrinth to find the murderer. As he goes about his investigation, he proudly shows off to his novice the great wealth of knowledge he has accumulated by relating stories to him.

The best scene has William and his novice lost in this maze looking for a Greek book about a comedy written by Aristotle in the world’s greatest library, where banned books were secretly stored and kept out of circulation.

If only the telling of the story wasn’t such a clumsy venture and the identity of the killer so easy to solve, this could have been a more enjoyable film. Sean Connery is charismatic, though he’s an odd choice to play the lead. If you can suspend your disbelief in him as a book lover to the extreme and see him more like a modern sleuth, then his characterization seems to be a humorous one. Though, I still think this part would have been better served if played by someone a bit more quirky. He reminded me too much of his James Bond action film persona, which was a definite clash with the medieval scenario.

The story picks up steam when the Grand Inquisitor (F. Murray Abraham), played by Abraham with a relish for wickedness, arrives to solve the mystery. It turns out he had a conflict with William many years ago over an inquisitional matter. The two get locked in a duel of wits, as the narrow-minded inquisitor challenges the rational William, who is faced with the danger of being accused of being a heretic himself.

All the evils of the church are portrayed with accuracy: its greed, its arguments for accumulating wealth while its worshipers remain poor, the Inquisition, the monastery as a place for superstition to flourish, and the doom and gloom of monastic religion. But the weakness inherent in the film, is in the dullness of the characters (looks aside) and the story itself is bereft of the wit the author gave it in its printed word. When the powerful apocalyptic finale comes and the monastery is in flames, it is too late to save the film. Just like William saved only a few valuable books from the fire, the viewer can cherish only a few scenes that were irresistible.

The film has a voiceover from the novice (Dwight Weist) now grown to be an old man who remembers the lessons his master taught him; but, he even has a more vivid image of the filthy wench (Vargas) who deflowered him, the only time in his life he experienced such earthly pleasures. 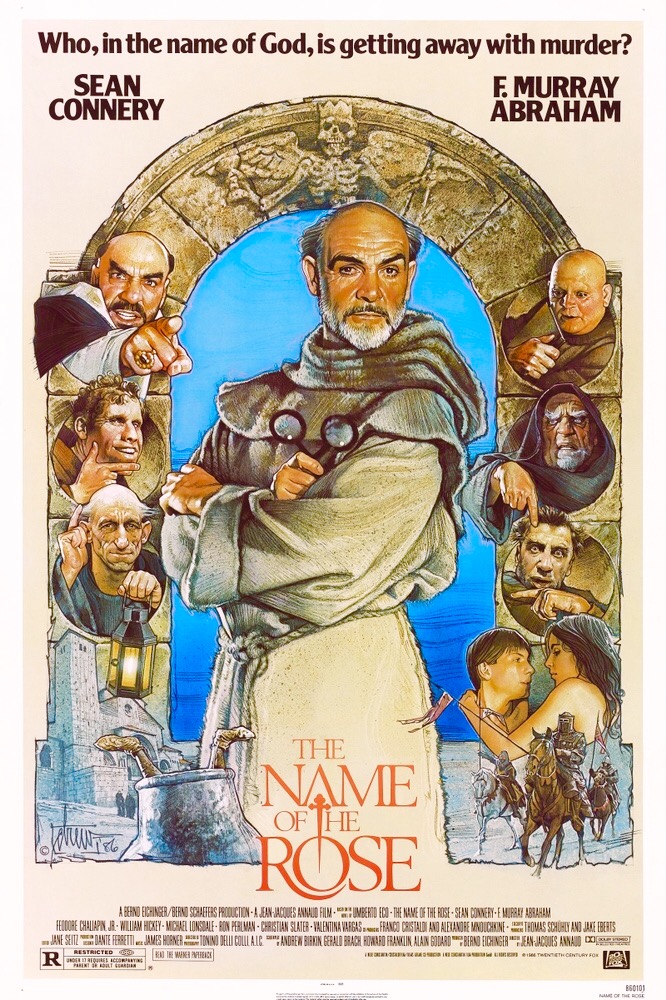