“The protagonist, Dick Powell, seems more like a stuffed shirt who is greedy, pompous, and self-absorbed than he does as a heroic figure the audience can sympathize with as a victim fighting off a powerful gangster and a clinging femme fatale.”

This 1940s film noir is shot in black-and-white and goes through the motions in a mechanical manner as it works out of a conventional plot line involving revenge, profit, and jealousy. Robert Rossen serves as director and screenwriter, as he directs for the first time after serving as a writer of detective mysteries from the 1930s on. This film came before he mastered the finer points of this genre in “Body and Soul (1947).” “Johnny O’Clock” adequately touches base with some of the noir conventions mainly through the quality of the shadowy photography supplied by Burnett Guffey, but suffers from the story and the characterizations being so routine and the dialogue so flat and the pacing being so unfocused that the story loses its grip on the corrupt web it spins involving police and gamblers. The protagonist, Dick Powell, seems more like a stuffed shirt who is greedy, pompous, and self-absorbed than he does as a heroic figure the audience can sympathize with as a victim fighting off a powerful gangster and a clinging femme fatale. But with fine performances surfacing in particular by Dick Powell, Evelyn Keyes, and Lee J. Cobb, despite such weaknesses in the storytelling, the film never completely falters. This hard-boiled noir part that Powell plays as Johnny O’Clock comes three years after his starring as gumshoe Phillip Marlowe in “Murder My Sweet,” as this former song-and-dance man changed his nice guy movie image and began taking on tough guy roles.

O’Clock is a successful casino manager and junior partner in a legal New York City gambling club with senior partner Guido Marchettis (Gomez) providing the gangster muscle behind the casino operation. Guido hired a trigger-happy corrupt cop, Chuck Blayden (Bannon), to deal with his business problems that couldn’t be handled cleanly by his brainy junior partner, as the film opens to the newspaper headlines of a gambler shot by Blayden while resisting arrest. Cigar smoking Inspector Koch (Lee J. Cobb) visits Johnny in his luxury hotel to see if he can work a deal to get him to testify against his boss and tell him what he knows about Blayden in exchange for a future favor. Next, the hatcheck girl in the casino, Harriet Hobbs (Nina Foch), comes to Johnny and asks him what to do about Blayden, her boyfriend for the last six months, who wants to cruelly dump her. She says she still loves him even though he treats her rotten. Then Blayden shows up at the casino to put the squeeze on Guido into becoming partners in the casino. Before the characters of Blayden and Harriet could be developed, they both turn up dead. First Harriet’s body is found in her flat and the murder is made to look like a suicide from gas fumes in her locked apartment. The only thing is the cops discover she’s been poisoned. Soon after Blayden is found floating in the river.

Arriving in town to find out exactly what happened and to grieve for her sister is the attractive blonde Nancy (Keyes), and she introduces herself to Johnny and tells him her sister said nice things about him. There’s an instant attraction they have for each other, as Johnny pulls his classy gentleman’s act and escorts her around town. But Guido’s wife Nelle (Drew), who was a former girlfriend of Johnny’s, is also still attracted to him and gives him a special watch with an inscription on the back declaring her love for him. She also gives her hubby who just returned from Mexico the same kind of watch, but without the love inscription. Johnny rejects her love and tries to return the watch, but she refuses to take it back. Johnny gives it to his trusted friend Harriet to return, but she never gets a chance to and Koch finds the watch in her apartment. He then brings in for questioning Johnny’s so-called ‘man,’ Charlie (Kellogg), a jailbird and two-time loser whom he trusts and made his flunky because he likes having him around. He shares his room with him at the hotel and helps him meet expenses, in return he expects loyalty and for him to run his errands. Koch squeezes nothing out of Charlie, but he then brings in Johnny and Guido to show them the watch he found in Harriet’s place. Jealousy gets the better of Guido’s business sense, and he gets Charlie to finger Johnny for his hit men. But the attempt to kill Johnny fails, and Johnny then decides to end the partnership with Guido in a businesslike way by getting his share of the dough and splitting. For some odd reason, his money is in the casino’s safe (Why trust a bank when you have Guido?).

Guido, still burning with jealousy, puts a slug in his junior partner, but in turn gets taken down as his fire is returned. When Nelle is rejected again by Johnny, she fabricates a story to the police that Johnny shot her hubby while trying to rob the place. Koch and Nancy track the bleeding Johnny down in the casino, as he is aiming to go on the run by himself with the money. But Nancy talks him into surrendering and taking his chances in court, as she bats her pretty eyes and tells him she’ll be there to support him.

Johnny’s main crime seems to be in telling lame wisecracks, having bad judgment in people and being guilty by association. Unfortunately, the film never makes Johnny into someone worth caring about. Nancy’s murdered sister appears to be some unfortunate bimbo caught in a tawdry relationship who was in the wrong place, and the grief shown for her death by Johnny and Nancy never resonated with this viewer. It all boiled down to a routine showdown at the end, and an unsettled ending that bubbles over with indications of romantic happiness awaiting the noir protagonist. The mood throughout was cutting against the grain of what is most appealing about film noir: the protagonist’s vulnerability and dark side being exposed so he can’t function in society. There’s no such weaknesses in Powell’s character. 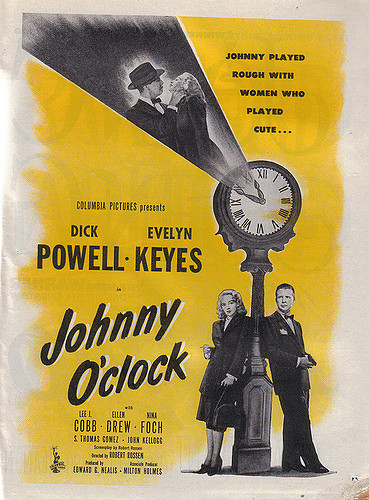