“An unpretentious, silly, low-brow comedy that has the juice to induce laughter if you don’t mind going low for the laughs.”

An unpretentious, silly, low-brow comedy that has the juice to induce laughter if you don’t mind going low for the laughs. It’s the third installment of the franchise. Peter Segal (“Grudge Match”/”Get Smart”) directs in a formulaic way the free-wheeling film and writers Pat Proft, David Zucker and Robert LoCash have a field day poking fun at higher-level films (like the Eisenstein’s Odessa Steps sequence that unfolds with a similar bit from DePalma’s Untouchables), through an onslaught of sight gags, mix-ups, dumb jokes and slapstick. If you liked the others you’ll probably also like this one.

Bumbling, trigger-happy, nutty, newly retired L.A. Police Lieutenant, Frank Drebin (Leslie Nielsen), has been married for six months to lawyer Jane Spencer Drebin (Priscilla Presley). He tires of baking cup cakes at home and takes an undercover police assignment offered to him by his former police pals, the jerky captain, Ed (George Kennedy), and the dopey cop Nordberg (O. J. Simpson). Frank gets close to the terrorist Rocco (Fred Ward), who’s the mastermind from his jail cell behind a number of city bombings and is scheming to bomb the Academy Awards ceremony.

As a strategy, Frank helps Rocco escape and meets the mad bomber’s wacko mother (Kathleen Freeman) in her lakeside cabin hideaway. The busty Tanya (Anna Nicole Smith), the bomber’s girlfriend, works as a nurse in a sperm clinic, and is also at the hideout. After the escape Jane, who left hubby because of the undercover mission, somehow ends up a hostage of the gang after showing up at the hideaway. She goes with the gang to Hollywood, where Rocco plans to employ a letter bomb to blow things up and to receive 5 million from an Arab terrorist group headed by Papshmir (Raye Birk). At the ceremony, Hollywood becomes the butt of the jokes because of its falseness. One of the Oscar nominated Best films is a musical about Mother Theresa. Everything is played for a laugh, as our inept hero saves the day.

Though some jokes are misfires and all the homophobic ones are limp, most of the other crude sexual jokes should appeal to those adults who can’t leave their adolescence safely behind. 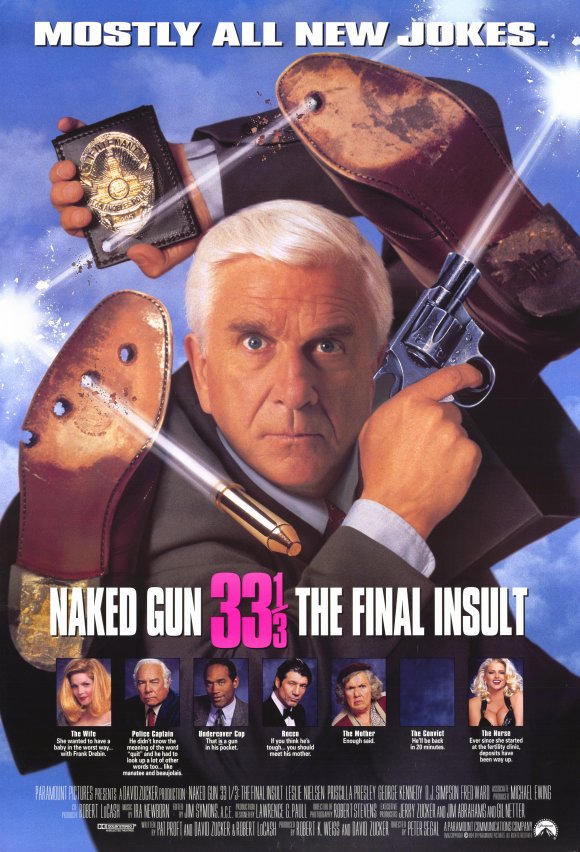