“It’s a tacky one-joke movie, and that joke wears thin faster than a speeding bullet.”

A futile attempt at a breezy romantic comedy directed by Ivan Reitman (“Ghostbusters”/”Animal House”) from a lame script by first-time movie screenwriter Don Payne (“The Simpsons”). It’s a tacky one-joke movie, and that joke wears thin faster than a speeding bullet. The setup has Uma Thurman playing the Clark Kent nerdy role of a neurotic Gotham art historian named Jenny Johnson, while she’s also in secret the superheroine G-Girl. Luke Wilson plays nice guy Matt Saunders, the bland project manager of an architectural firm, who picks up mousy looking Jenny on the subway and becomes her steady. The big joke is built around such a nebbish dating a superheroine and not knowing it. Matt’s best pal in the workplace is the creepy know-it-all Vaughn (Rainn Wilson), who fills his ear with politically incorrect sexist advice. Anna Faris plays the sweet blonde Hannah, Matt’s assistant he has a crush on but she’s going out with male model stud Steve (Mark Consuelos). Carla (Wanda Sykes) is the pushy supervisor who is itching to bring Matt up on sexual harassment charges, and while pulling that bit several times never gets a laugh for all her trouble.

The movie never achieves more than a series of bad wimp jokes directed at Matt and bad neurotic jokes directed at Jenny. Matt breaks up with her when he can’t take any more of Jenny’s nuttiness, insane jealousy and manipulative behavior, despite their good sex where his bed breaks during one of their kinky moments. As a result, the insecure chick becomes enraged in a hellish fury as a woman scorned; especially peeved, after telling him her big secret she told no one else. While Matt and Hannah, his soul mate, seize the opportunity to get together, after her stud boyfriend is given the gate for cheating, only to have G-Girl throw a giant white shark through their NYC hi-rise luxury apartment. This slapstick bit becomes the film’s most amusing moment, as it gleefully has the do-gooder giving up her heroics around the Big Apple to instead selfishly get satisfaction from a petty personal matter. Jenny upsets Matt so much, he agrees to help G-Girl’s arch villain enemy Professor Bedlam (Eddie Izzard) to take away her superpowers.

The film stops being funny as it gets caught up in numerous uninvolving subplots and builds to a dumb catfight between the two loves of Matt’s life, as Reitman tries to push the hot PG-13 buttons to find something funny out of this clever premise (at least while pushing it to the execs upstairs it must have seemed funny) that never fulfills its promise. Brit comedian Izzard is wasted in an underused role that has him not doing much as a villain, while Uma is perfectly cast but does more with her hair than she can with the script. Luke is a pleasant bore but doesn’t elicit much yuks. The project seemed more fit to be a television sitcom than a feature movie. Also, it was directed in a sloppy and artless manner, and the characters were never developed further than being cartoonish and unworthy of our concerns. 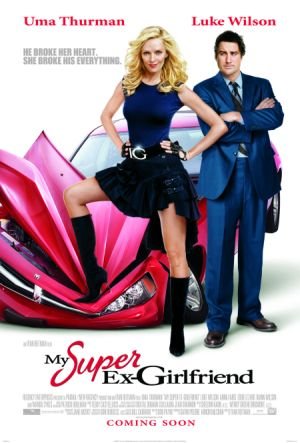