“Claude Rains gives another one of his great performances, brilliantly playing a vile character suspected of murder.”

A suspense horror film that’s slightly stilted, but still entertaining. It’s directed with an eerie guile by former stage actor Stuart Walker(“Great Expectations”/”Werewolf of London”/”White Woman”). A team of writers mentioned above adapt it from an unfinished novel by Charles Dickens. The author died completing only half the novel. The film’s tacked on ending became a source of controversy. Some critics even questioned if Dickens intended a murder to be committed, like in the film.

Claude Rains gives another one of his great performances, brilliantly playing a vile character suspected of murder.

In the English town of Chesterton, the opium addict cathedral choirmaster, John Jasper (Claude Rains), who also works in a finishing school, is cravenly jealous that his nephew Edwin Drood (David Manners) is engaged to the beautiful student Rosa Bud (Heather Angel) he’s obsessed with. A newcomer to town, Neville Landless (Douglas Montgomery), also falls in love with Rosa, and she seems smitten with him. Without warning one day Edwin Drood disappears. We wonder if he was murdered or maybe just went missing. The creepy choirmaster is suspected of murdering him, but no body is found and no evidence is found to link him to a murder.

The Mystery of Edwin Drood came to Broadway as a musical in 1980s, and as a gimmick offered several alternate endings. It was refilmed in 1993. 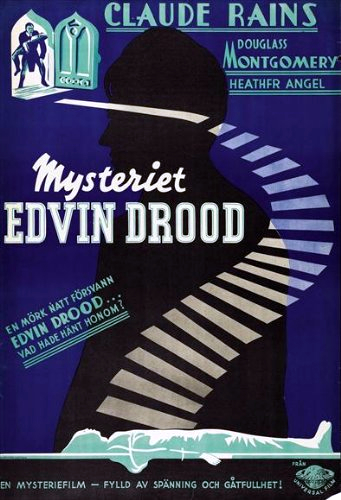