An MGM prestige picture, based on the best-seller novel by Erich Maria Remarque. It starts out about Germany’s fatalist ‘lost generation’ in the post WW I period and turns into a doomed love story set in a background of a pessimistically changing world, where the dark clouds of the Third Reich begin to manifest. The censors made sure any talk of Nazis was verboten, which neutered the author’s political intentions to sound an alarm about what evil was looming in the near future for Germany. Despite the film being well-produced and well-acted and, for the most part, faithful to the book, it seemed naive when politics was dropped like a hot potato as the film seemingly lost its purpose when not allowed to tell of the author’s intended indictment of Nazi Germany.

Sappy romantic director Frank Borzage(“A Farewell to Arms”/”History is Made at Night”/”The Shining Hour”) turns it into a crowd-pleasing tearjerker, shot in b/w, that amazingly enough had some tender Hollywood romantic moments to cherish.

The overblown melodrama tells of three World War I veteran officers, the loyal comrade rationalist Otto Koster (Franchot Tone), the gay idealist Gottfried Lenz (Robert Young) and the romantic Erich Lohkamp (Robert Taylor), who return home to Germany in 1918 after the armistice and all are filled with plans to live life fully. They operate together an auto repair shop and hang around with the ‘lost generation’ crowd. All three find favor with the malnourished, penniless and jobless aristocrat Pat Hollmann (Margaret Sullavan, stage star), who says“we’re neither dead nor alive.” Pat rejects her fascist monocled sugar daddy (Lionel Atwill) and instead chooses to marry Erich. But tragedy hits when it’s discovered Pat is dying of terminal TB.

F. Scott Fitzgerald’s dialogue didn’t work for star Sullavan, who demanded another script. The studio went along with her request and the producer Joseph L. Mankiewicz rewrote the dialogue and that immensely pleased the stage actress turned film studio actress. She received an Oscar nomination for Best Actress. Of note, the screen credit went to the novelist and was Fitzgerald’s only one. Edward E. Paramore, Jr. was also credited as screenwriter.

The reviews were generally positive, but the box office results were not. Blame went to the censors for heeding the warnings of the German consulate and forcing the studio to not say anything about the Nazi rise to power and their subsequent atrocities. The criticism stood because at the time of the film’s release in 1938, it was apparent the Nazis were evil and even though the film is set in 1921–at an early stage of the Nazi movement–the public was not pleased with what they took was a whitewash. 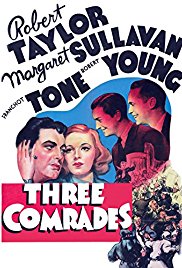