“This one clearly has more meat on the plate than Araki’s earlier more shallow and sensationalistic films.”

Independent filmmaker Gregg Araki (“Totally F***ed up”/”The Doom Generation”/”Nowhere”) uses Scott Heim’s 1995 novel to tell a sobering, mature and disturbing tale about two young men and the homosexual abuse they suffered as children. The tale of childhood innocence lost begins in 1981 when Neil McCormick (Chase Ellison, and later, Joseph Gordon-Levitt) and Brian Lackey (played first by George Webster and then in his late teenage years by Brady Corbet) are age eight and both play on the same Little League baseball team in their hick Hutchinson, Kansas, hometown. Friendly mustached hunky coach (Bill Sage) lures his star player Neil to his child friendly bachelor house that’s filled with a big-screen TV, video games and snacks. The smooth coach sweet talks the lonely but cocky kid, looking for adult approval but left on his own by his promiscuous single mom Ellen (Elisabeth Shue), into lying on the kitchen floor and tells him “When I really, really like someone, there’s a way I show them how I feel.” He then molests the unsuspecting youngster, who takes it for love and the coach as the father he never knew. The other youngster, Brian, is an uncommunicative, spectacle-wearing, nerdy and socially backward youngster who is first seen when he blacks out after getting caught in a rainstorm, and five hours later he’s seated alone in his basement with a bloody nose and no memory of what happened to him. Later we learn his dad is never around, and his hard-working but dull and possessive mom (Lisa Long) has driven away his father (Chris Mulkey). Over the years, the missing five hours still haunt him, and Brian lives out his youth believing that he was kidnapped by space aliens. This is reinforced by a TV program that interviews an intense farm girl (Mary Lynn Rajskub) living in a nearby town who claims to be abducted by aliens and will later meet Brian. But, as he gets older, he suspects Little League teammate Neil can help him more than she can to fill in those blank moments.

As soon as Neil becomes of age he outgrows his hometown where he already has become a gay hustler of older men in the playground, and splits for NYC where he meets up with hometown soul mate Wendy (Michelle Trachtenberg)–someone who sort of understands him. But he finds the Big Apple too much after some rough sex in a hustling experience gone wrong with a bullying older man and returns home at 18, during Christmas Eve, where he reunites with Brian upon his request. The damaged youngster remained in town, still living at home, but never recovered from his bad childhood experience and retreats to live an isolated and untrusting life with his only close friend being the town’s resident queer Eric (Jeff Licon). In a magical way, on Neil’s homecoming visit, the boys’ stories come together and their affecting journey leads to an illuminating self discovery of what went down when they were eight.

Araki daringly questions if it’s possible for one child to love that childhood pedophilia experience, still thinking it was a real love experience, while another becomes a basketcase and is too ashamed to hear the truth he’s dying to know. All the attention is turned on the vics and how they handle themselves (both have trouble making relationships), as the child abuser is all but ignored. It’s not a pleasant watch, but the characters become remarkably real as human beings and the uneven flawed parallel stories (Corbett’s alien story pales in interest compared to the great heartrending performance by Gordon-Levitt, as he tries to sidestep AIDS, bad johns and bad karma) nevertheless have a way of staying with you. This one clearly has more meat on the plate than Araki’s earlier more shallow and sensationalistic films. 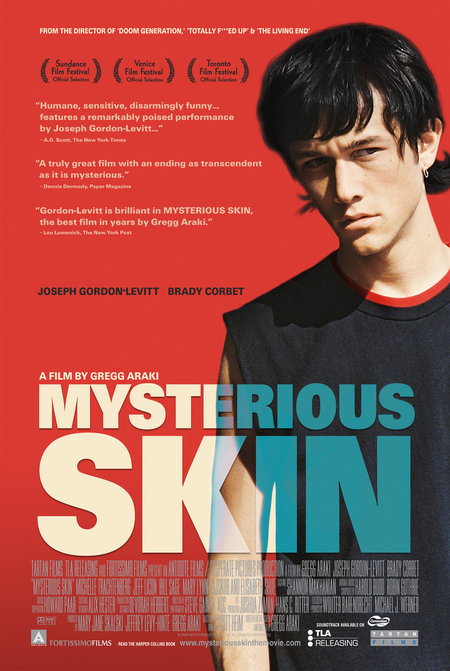