“An excellent vehicle for O’Toole to shine in a tour de force performance.”

The favorite year is 1954; the location is New York City at NBC’s broadcast studio at Rockefeller Center. Richard Benjamin makes his directing debut in this very funny and amiable physical comedy romp, whose main character played by Peter O’Toole is modeled after legendary Hollywood actor, boozer and womanizer Errol Flynn.

It was based on the real-life experience Mel Brooks (the film’s co-producer) had with Flynn when he appeared as a guest on Sid Caesar’s Your Show of Shows and Mel was the gag writer assigned to be his keeper and make sure he shows up for the live show on time.

It’s cowritten by Norman Steinberg and Dennis Palumbo, and is based on Mr. Palumbo’s story.

It revels in nostalgia for the so-called golden age of television, in those early days when all the shows were live and the idiot box became the rage sweeping across America in competition with movies. Spoiled somewhat by a few over sentimental moments of a drunken O’Toole visiting his estranged 12-year-old daughter Tess in Connecticut and getting misty-eyed for how sweet she turned out despite his neglect and the schmaltzy father-and-son relationship that the star develops with the gushing nerdy idolizing gag writer Benjy Stone (Mark Linn-Baker), playing the Mel Brooks role, who in the end lectures O’Toole on how to be a good parent.

Otherwise, it’s an excellent vehicle for O’Toole to shine in a tour de force performance, supported by a superb comedy supporting cast that includes Selma Diamond as the sourpuss wardrobe mistress, Adolph Green as the befuddled producer and Bill Macy as the big talking head writer who wimps out whenever he’s confronted by the star of the show.

Matinee idol Alan Swann (Peter O’Toole), world famous actor in swashbuckling films, is to be a guest on The Comedy Cavalcade, a variety show that stars the bullying King Kaiser (Joseph Bologna). After the star arrives late on the set for rehearsals Benjy, the junior writer of the show, is made responsible to baby-sit him and make sure he arrives sober for future rehearsals and, especially, on the day of the show. They immediately hit it off and Swann takes our boy to the ritzy Stork Club, where Swann dances with an admiring older lady (Gloria Stuart) with her husband’s permission and dashes off with an ogling young attractive woman admirer whose date is irate.

There follows an early-morning walk through Central Park by the two, where the impulsive Swann goes for a joy ride on a police horse. Benjy then takes Swann to his remarried Jewish mom Belle’s (Lainie Kazan) Ocean Parkway, Brooklyn apartment for a home meal, and in an inspired comical scene the star cavorts with his new friend’s gauche family as mom fawns over the star and Uncle Morty (Lou Jacobi) crudely asks about his paternity suit. That’s followed by a visit to a Park Avenue apartment building where a drunken Swann wants to help his awkward friend get it in on with the assistant producer K.C. Downing (Jessica Harper), someone the gag writer is all choked up about but can’t get to first base. Instead of knocking on the door, Swann uses the roof’s fire hose to slide down the building to her terrace, but misses and hangs suspended until rescued by snobbish tenants who tell him he just missed the Downing apartment. It kicks in with a madcap finale, that has Swann making a grand entrance during the live TV show as a swashbuckler to help Kaiser from being attacked for real by goons hired by labor mobster boss Karl Rojeck (Cameron Mitchell), who is upset because Kaiser has a skit poking fun of him as Boss Highjack. 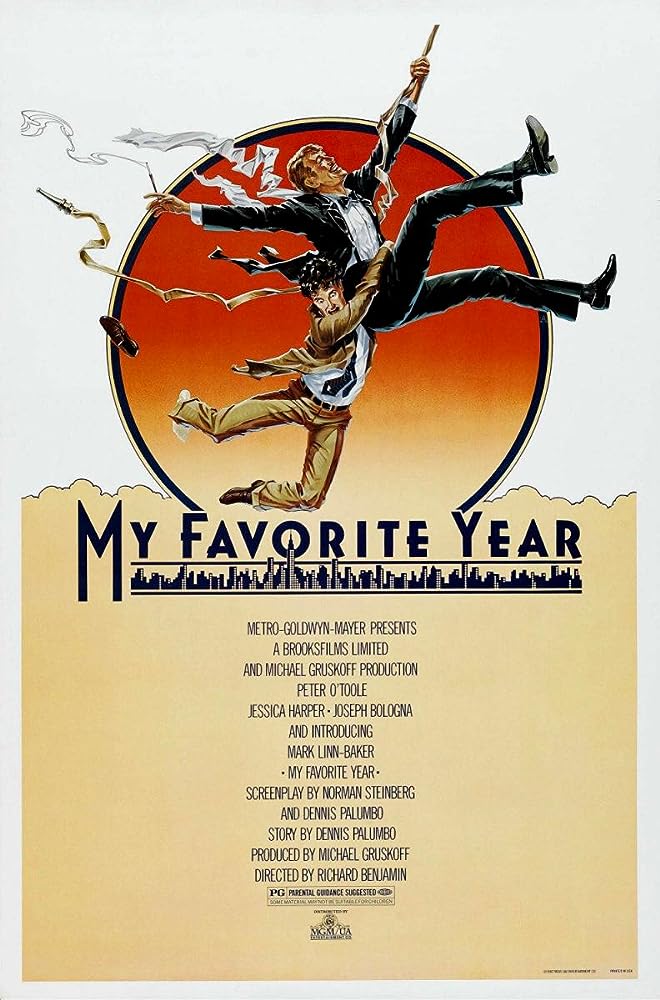