“One of the worse spy movies I’ve ever seen.”

TV director Leslie Martinson (“Hot Rod Girl”/”Fathom”/”Batman”)helms one of the worse spy movies I’ve ever seen. The star, Rosalind Russell, wrote the tiresome screenplay under the pseudonym of C. A. McKnight. The film was a bomb and the aging miscast Russell, in her sixties, retired from theater films after embarrassing herself in this turgid, scatterbrained and heavy-handed unfunny lightweight comedy (she did make one more movie-for-television in 1972, The Crooked Hearts). It was such a sour pic that it was unbearable to watch how everything was wrong about it. It was based on the novel by Dorothy Gilman, the first one in the long-running series on amateur spook Mrs. Pollifax.

Wyoming’s Jackson Hole takes the place of Albania during the shoot. The documentary picture “The Three Faces of Communism,” which was filmed in the at-the- time occupied Albania, serves as primary source material for the Mrs. Pollifax film.

The middle-aged widowed housewife, with grown children, from Montclair, N.J., Mrs. Emily Pollifax (Rosalind Russell), is bored and patriotic, so she shows up at the CIA headquarters and volunteers to be a spy. A CIA mid-level boss, Carstairs (Dana Elcar), assigns the eager-beaver rookie to go as herself to be a tourist in Mexico City and at an arranged time go to a given bookshop, where a copy of Charles Dickens’ A Tale of Two Cities will be displayed in the window. Mrs. Pollifax is to relay to the book store proprietor a coded message and will then buy the book from the proprietor, DeGamez (Don Diamond). Her assignment is to be a courier who picks up sensitive microfilm that will be delivered to the bookstore by field agent Tupok, in which she will pass onto the CIA. When the agent is killed, the compromised mission takes a different turn as another agent delivers to the book store the microfilm and this time it’s hidden in a deck of cards. Before leaving Mexico City with the deck of cards, Mrs. Pollifax makes another visit to the book store and is lured in after seeing a copy of A Tale of Two Cities in the window. But the real DeGamez was murdered and the impostor drugs Mrs. Pollifax’s coffee and after searching her hotel room puts her on a plane to Red Chinese-controlled Albania for further questioning, where she ends up in a jail atop a mountain along with veteran cynical American agent John Farrell (Darren McGavin). Red Chinese Gen. Perdido (Albert Paulsen), the man who posed as DeGamez in the bookshop, interrogates Farrell.

Others at the jail include the following Albanians: General Berisha (Nehemiah Persoff), commander of the jail; Colonel Nexdhet (Harold Gould), the patriotic Albanian displeased with the Chinese occupation; and Sgt. Lulash (John Beck), one of the guards who has plans to defect to the west.

It’s hard to know what Russell was thinking when she made this stinker. But her theatrical producer husbandFrederick Brisson bought the rights to the novel in 1969 and was the film’s producer. 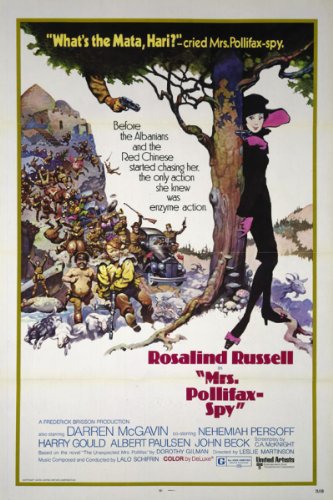