“The period comedy film is a rich character study that offers a ride as smooth as a Coupe de Ville.”

Demented comedy that scores with its black humor. Served well by a great cast and a great screenplay by director Barry Levinson (“Toys”/”Good Morning, Vietnam”/”Rain Man”). It follows Diner and comes before Avalon in Levinson’s trilogy of pictures with a Baltimore setting. The retro film is set in 1963, when “Bonanza” was America’s favorite TV show, the bossa nova its favorite dance, salad bars were called smorgasbords and battleship sized Cadillacs were the car of choice if you wanted to impress others.

One auspicious day, BB (Richard Dreyfuss) drives his new blue Caddy out of the showroom and after driving a 16th of a mile collides with a yellow Caddy owned by Tilley (Danny DeVito). The fender bender collision gets both men crazed and an ongoing feud develops, which becomes the plot line for the film as both men are coincidentally tin men (aluminum siding salesmen). The men go tit-for-tat in reprisals, as they take their further revenge out on each other’s Caddys until BB ups the ante by seducing Tilley’s Social Security office worker’s wife Nora (Barbara Hershey), the only character in the film that one can really like for being human, and calling up Tilley to tell him of his conquest to get his goat. The twist is that the swinging bachelor falls in love for the first time in his life, but still remains a scam artist capable of all kinds of duplicity.

The tin men have to deal with Maryland’s Home Improvement Commission checking into their fraudulent sales schemes and threatening to take away their license for such hustles as posing as Life magazine photographers to get the foot in the door of unsuspecting housewives.

Both men hang out after work with their colorful sidekicks in diners, where they shoot the breeze in a relaxed way as they trade job-related stories and make small talk. Moe (John Mahoney) is BB’s main cohort, while Sam (Jackie Gayle) serves the same role for Tilley. Sam is obsessed with talking of nothing but how unreal the TV series Bonanza is because the father is a 50-year-old while he has three 47-year-old sons and all three of dad’s wives died in childbirth.

The period comedy film is a rich character study that offers a ride as smooth as a Coupe de Ville. Levinson seems to have an affinity for both of the mean-spirited unscrupulous tin men and seems to acknowledge them as crude flimflam men but still admires these hard working stiffs for their perseverance. 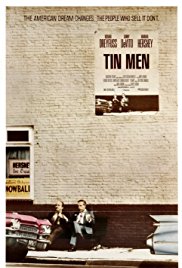