YEAR OF THE GUN

“The film’s political authenticity comes into doubt because the characters are so superficial.”

DirectorJohn Frankenheimer (“Black Sunday”/”The Manchurian Candidate”/”Seven Days in May”) throws a Molotov cocktail at himself in this political thriller. What went wrong has to do with a miscast bland hero in Andrew McCarthy and an unconvincing sexpot costar in Sharon Stone, a muddled script from David Ambrose that is adapted from the novel by Michael Mewshaw and a failure to say anything of interest about its subject of terrorism while being so dull in its action shots of chases, kidnappings and shootouts. The film’s political authenticity comes into doubt because the characters are so superficial, the Red Brigade terrorists seem cartoonish and there’s never a sense that anything intelligent is being revealed.

A smug young American journalist David Raybourne (Andrew McCarthy) returns to Rome, Italy, in 1978, just in time to witness an outbreak in violence caused by the terrorist group called the Red Brigade. There’s a street riot and a kidnapping and murder of a wealthy male college student, and a sense of despair and anarchy hangs over the city run by Aldo Moro’s weak centralist regime. David hooks up with former mistress, the wealthy Lia (Valeria Golino), a politically active professor friend and cousin of Lia’s, Italo Bianchi (John Pankow), and an aggressive and overly ambitious chic looking American photojournalist Alison King (Sharon Stone). David is secretly writing a book about terrorism and inadvertently gets involved with a kidnapping terrorist plot when news of his manuscript is leaked by Alison to Italo who tells it to the Red Brigade. Alison’s betrayal is because she wants a piece of the action and a piece of David. The manuscript is stolen and falls into the wrong hands, resulting in bad news for the innocent looking American reporter.

When the plot of David’ novel, a mix of reality and fiction, takes place for real and the Red Brigade kidnaps Italy’s Prime Minister Aldo Moro, it leads to the American reporter caught in a complicated web of intrigue where he’s accused by one side of having inside info on the crime and the other side of being a possible snitch. Also, David’s boss (George Murcell), on the English-language Rome newspaper, taken for a possible CIA operative, is murdered and the innocent Italo is implicated.

I’m not sure what I learned about Italian realpolitiks. I guess Frankenheimer was trying to draw the conclusion that the fine line between fact and fiction can easily be blurred, with dangerous results. But the clichéd and clumsily told story doesn’t deliver as intended. 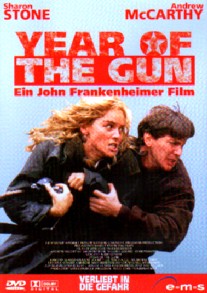