A quintessential Frank Capra feel-good film, which means its pure cornball idealism. It’s based on the book The Gentleman From Montana by Lewis R. Foster and penned with sharp dialogue by Sidney Buchman. This political comedy about the exposing of corruption in Washington was among the top grossing films of 1939. Jimmy Stewart gives one of his stellar and most recognizable performances as the archetypal decent common man, though he lost out that year in the Oscars to Robert Donat’s Goodbye Mr. Chips.

The film opens to the death announcement by the press of Wisconsin Senator Samuel Foley. The once idealistic but now slimy senior Senator Joseph Paine (Claude Rains) immediately confers by phone with the party hack Governor Hubert “Happy” Hopper (Guy Kibbee). Hopper then calls the venal head of the political machine, media magnate Jim Taylor (Edward Arnold), on what to do about the appointment of an interim senator to fill out Foley’s term. Taylor has proposed a pork barrel bill to finance an unnecessary dam, so he expects the governor to appoint a senator who will go along with the program no matter what. After many appointees are rejected, Hopper follows the suggestion of his children and nominates local hero Jefferson Smith (James Stewart), leader of the state’s Boy Rangers group (which I guess is like the Boy Scouts). Smith is an innocent who quotes Jefferson and Lincoln and idolizes Paine, who had known his crusading editor father.

After a bumpy start before the press and his staffers, the naive rube wants to quit. But Paine encourages Smith to work on a bill for a national boy’s camp. With the help of his hard-boiled, canny, seen-it-all secretary, Clarissa Sanders (Jean Arthur), whom Smith wins over with his refreshing honesty, he prepares to introduce his boy’s camp bill to the Senate. But when he proposes to build the camp on the Willets Creek dam site, Taylor and Paine pressure him to drop the measure. Smith discovers Taylor and Paine are crooks who want the Willets Creek site for graft. When he attempts to expose them, Paine accuses Smith of stealing money from the Boy Rangers and wins the day in the press. Smith is again ready to quit Washington, but Saunders urges him to stay the course and fight for the people. The resolved Smith returns to the Senate chamber and squares off against Taylor and the media forces in his state who are out to ruin him, as he’s tutored by his secretary on how to handle these sharpies with some political skill and encouraged to dish out his own homespun patriotic ideals. In the film’s classic climactic filibuster scene, Smith speaks up for the innocent citizens victimized by the corrupt politicos by telling the Senate chamber: “I’ve got a few things I want to say to this body. I tried to say them once before and I got stopped colder than a mackerel. Well, I’d like to get them said this time, sir. And as a matter of fact, I’m not gonna leave this body until I do get them said.” The filibuster strategy works as it lays a guilt-trip on the overcome Paine, who once again remembers why he became a senator.

By golly, however corny it felt good having Stewart speak up for the little man in this breezy and quick-paced and entertaining film that is filled with hope that democracy works after all–pointing out that America’s a land of equal opportunity where all social classes could be heard, even the voice of the little people. 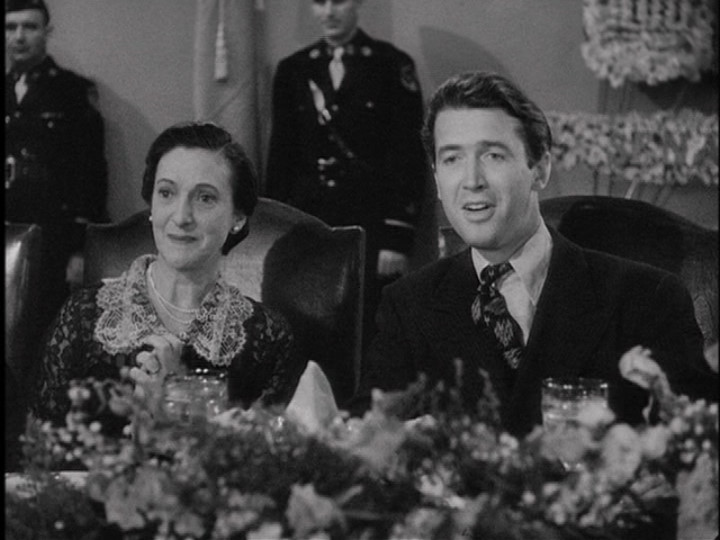