RUN FOR THE SUN

A spine-tingling jungle adventure/romance tale directed by Roy Boulting and scripted by Dudley Nichols from a short story “The Most Dangerous Game” by Richard Connell. So what if the story is full of holes and one has to suspend one’s disbelief to sink one’s teeth into the film’s shaky plot line! This is the third film version made from that novel and even if it’s not the best version and it never approaches the gruesome nature of the novel, it still jells because of the superb cast and especially the chilling portrayal of a wealthy upper-class British turncoat given by Trevor Howard. He becomes a Nazi during the war because he’s disillusioned with himself and his country, but when his side loses and his Nazi wife is killed in a Brit bombing raid he opts to hide out in the Mexican jungle rather than face up to his war crimes. He can be taken for Lord Haw-Haw’s dead-ringer.

The photography by Joseph LaShelle is excellent, as he makes use of SuperScope 235–one of the widest film processes at the time. It was filmed in Mexico and superbly captures the stifling flavor of the jungle with wild pigs and a pack of snarling bloodthirsty Doberman’s competing for the title of King of the Jungle.

Katie Connors (Jane Greer) is an attractive hotshot journalist for Sight magazine located in New York City, who convinces her editor that she can tackle the story of world famous author-adventurer Mike Latimer (Richard Widmark) and his disappearance. She tracks him down by plane in the remote dinghy seacoast town of San Marcos, where he fishes all day and at night drinks booze like it’s water. The local Mexicans like the Spanish-speaking adventurer so much, they don’t even take him for a gringo.

The Americans have an innocent romance for a week, as Katie hides from him that she’s only there to get his story. His big secret as to why he dropped out is revealed to her during one lonely night when he feels that he at last met the right woman, as he is anxious to finally get it off his chest why he has writer’s block and vanished. It turns out that his lovely wife jilted him for his best friend. Katie feels she doesn’t have it in her to deceive him any more as she has fallen for him, and thereby she makes immediate plans to go to far off Mexico City and return from there to New York. But there’s no adequate transportation in town to take her there, so Mike insists that he flies her there in his small plane.

Due to a broken compass, they veer off course and wind up without gas and lost over the dense jungle and have to crash-land in an area inhabited only by some Indians and three fugitive European war criminals: the Nazi Browne (Trevor Howard) and two German-born Nazis, a colonel who murdered an entire village during the war and whose sister was Browne’s wife, Van Anders (Peter Van Eyck), and the unfriendly rifle carrying Jan (Carlos Henning), who was a Nazi pilot. The war criminals pretend they are archeologists and that they keep the pack of ferocious dogs around to let them out at night so none of the Indian workers on their plantation can escape. Soon after all their lies are slowly discovered by Mike, as he becomes suspicious of them when they ditch his plane so he can’t repair it and how they offer him no contact with the outside world. The war criminals turn nasty after he recalls Browne from his war correspondent days during WW11 as the traitorous voice who radio broadcasted to England Nazi propaganda, and he realizes they have been hiding here for the last ten years so as not to be detected and therefore there’s no chance that they will let them escape.

There’s an exciting chase through the jungle as the Americans escape with the three armed war criminals and their dogs after them in hot pursuit, as the couple flees to the east following the sun as a marker for Mexico City. “Run For The Sun” is valued as an escapist entertainment film and as an engrossing survivalist flick. 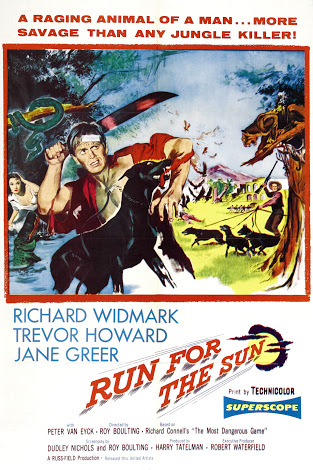