Neil LaBute (“In The Company of Men”/”Nurse Betty”/ “Your Friends & Neighbors“) directs this adaptation of the 1990 Booker Prize-winning novel by Antonia S. Byatt. Possession is a romantic mystery about two relationships a century apart. It parallels both romances by going back and forth between the one taking place at present and the one set in the modesty of the Victorian age in the lush Yorkshire countryside. It’s a different type of filmmaking experience from the Mormon playwright Mr. LaBute’s usual darker and more mean spirited sexual encounter type of flicks, as this highbrow Merchant-Ivory type of film seemed tame for someone of his rep as an anti-romantic. It’s so correct and proper, except for the scruffy, unshaven, American scholar played by Aaron Eckhart, who upsets the applecart and tries to poke holes in the elitist world of scholars by his blunt verbiage and sneaky deeds. But whose screen presence never seems quite right for this flick.

Also, the mystery part of the tale was too easily let go of in favor of the delicate romances. At best, it was an uneven film written by LaBute along with David Henry Hwang and Laura Jones. The director was never quite sure how to frame the romantic impulses that bloom with his two sets of lovers, as the modern romance seemed more like an acting exercise than an authentic passionate moment and paled considerably when compared to the flowery one in the past. Possession suffered from long lapses of non action where the fictionalized poetry of the period, prominent in the book, was eschewed in favor of having the academic researchers act crudely in love with their misdeeds. They are thrown together on the same literary trail across England to trace the lives of the more brazen lovers of the past. The poets were giving all the juicy prose dialogue (which weren’t that plentiful, anyway) and seemed to have the right attitude about their affair. Bereft of poetry and instead filled with romantic notions (ideas about why and how love flourishes), Possession failed to capture the 500+ pages of the book’s literate and thrilling qualities that made it such a corking literary detective yarn. In the book Eckhart’s part was played by a lower-class Brit and the two rival academic grave-robbers were rich and dumb Americans, instead of Brits as in the film. By changing the parts around, the film seemed to lose its balance and sense of humor.

Roland Michell (Aaron Eckhart) is a young upstart American scholar on a graduate school fellowship to London. While thumbing through a tome from Queen Victoria’s poet laureate Randolph Henry Ash’s private collection at the London library, he discovers a love letter addressed to a poetess stuffed between the pages. This is significant because Ash was recognized as having a perfectly chaste marriage and held up as a model for marital fidelity. It was always believed that all his great romantic poems were addressed to his wife Ellen. Roland steals the letter (a definite no-no for legitimate scholars) and then shows it to his wealthy lawyer friend (Hollander) seeking legal advice in case he’s caught. He then researches and discovers that the poetess was named Christabel LaMotte and contacts a brilliant feminist scholar whose expertise is in Ms. LaMotte’s poetry, Dr. Maud Bailey (Gwyneth Paltrow). She has not achieved notoriety in academia and therefore welcomes the chance to make a name for herself but with some reservations. She’s less nervy and confident than the shamelessly bold American, and also harbors some anti-American attitudes (a source for some humor). When the research becomes too revealing of her poetess’ life she prefers to pull back and not disturb history.

The Victorian poetess is someone the Brit researcher greatly admires and intimately relates to because of her independent streak and on top of that she’s a relation. The American actress displays an impeccable upper-middle-class British accent and plays the part of the icy and snobby untouchable Brit who wears her long blonde hair in a bun and is wary of men, but who underneath that exterior is really warm-hearted and a secret romantic. She’s robot-like perfect for the part, but can’t give her character any zing. The ambitious career-minded Roland is also wary of relationships for some unknown reason and doesn’t know how to tell her that he’s attracted to her. The moderns are too afraid of romance to either have one or not have one, but ironically their field of study is of the Romantic poet. That was the film’s cleverest ploy, one that it milked for the entire film.

Roland works for Professor Blackadder, who is one of the world’s two leading authorities on Ash. The other is a greedy collector of all Ash’s works, a fellow Brit named Cropper (Trevor Eve). He’s the one-dimensional villainous figure who uses his money to make him the most influential scholar in the field, and he looks down upon the more noble and academic Blackadder because he doesn’t have the bread to purchase anything original by the Victorian poet. He also managed to bribe one of Blackadder’s leading faculty scholars assigned to his department, Fergus Wolfe (Stephens), and he conspires to relay to him anything his boss is researching. Fergus was the former unsupportive boyfriend of Maude’s, which is why she’s so down on men.

Jeremy Northam makes for a handsome but uninspiring Ash while Jennifer Ehle is an expressive but limited Christabel, who lives with the sensuous and demanding dark beauty Blanche Glover (Lena Headey) in a relationship that was considered at the time as of one of friendship. Maude believes the nature of their relationship went beyond friendship and was a lesbian one. Through flashbacks the relationship between the renown poet and the more quiet poetess is shown to have begun at a party thrown by a wealthy sponsor of the arts, Crabb–Robinson, and has flourished in secret as the poets couldn’t resist each other despite the Victorian morality code for the upper-classes. The one who is most disturbed by this affair is the passionate Blanche. These Victorian romantics have the best lines in the pic. On their first verbal sparring Ash says “you cut me, madam,” and Christabel replies, “I’m sorry, I only meant to scratch.”

What happens throughout is wordy and not poetical or suspenseful, as LaBute bats the love theories he got from the novelist around through the dialogue of both the dead and living lovers. You would think his ear would be better tuned into the moderns, but the insecure academic pair provide hardly any sparks in their cautionary and testy romance. They couldn’t connect due to a lack of chemistry. In fact, Eckhart is a major distraction. He’s miscast and never convinces he’s a scholar, as he acts more like a shamus in a Mickey Spillane pot-boiler.

The film let go of the author’s poetry, so all that’s left are a few odd romantic moments alone with the Victorians–the Robert Browning-like Randolph Henry Ash and the Christina Rossetti-like Christabel LaMotte. The book is where all the fun, intelligence and poetry is. It might be true that the book’s literary subject-matter is very difficult for the cinema to duplicate, but the surprise is in how bland LaBute made this film; especially, from a director who prides himself on being a meanie. I would expect he works better penning his own films, as he seems to lose his edge otherwise–an example of that is how his “Nurse Betty” was softer than his own authored works. 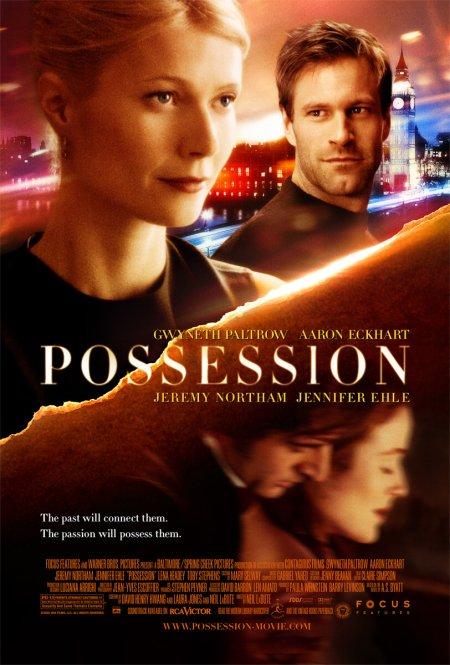