The most amazing thing about this strange occurrence tale, is that it’s loosely based on a real event. Of course, the characters in this film I take it are fictitious. The only thing that is real from that event, is that sightings began in November 15, 1966 and a bridge did collapse in Point Pleasant, W.Va., on December 15, 1967, drowning forty-six people, after which the sightings mentioned in the film and messages stopped. Some locals believe in an old Indian legend about a chief and his curse causing the sightings of a mothlike creature and that his prophecy had something to do with the bridge collapse. Other than that bit of realism injected into the pic this thriller plays as a familiar horror tale, with all the familiar scare devices and usual stodgy archetypal horror story characters around. Mark Pellington (Arlington Road) directs with style but leaves out any substance. What he does particularly well is set a good outward fright mood, as he makes full use of the gloomy wintry settings by using steely gray and blue colors (The film was shot in Pittsburgh).

The film holds your interest for most of the story by setting up some tense scenes that should make you a bit edgy; but, the script by Richard Hatem, based on the best-selling investigative book by John A. Keel, fails in the end to deliver any worthwhile payoff or logical explanation for all the strange events it records. It’s a sci-fi thriller that is easily forgotten when the movie is over. The film leaves you with nothing to think about, as it fades from memory as if it never existed. It’s one of those films that I’m sure if you asked me a year from now what’s it about, I would be hard pressed to remember anything about it.

John Klein (Gere) is an ace political reporter for the Washington Post whose new wife Mary (Messing) is beaming with joy that they just closed on a new big dream house. But before you spit out saying marital bliss, she gets into a fatal car crash while speeding along in their yuppie BMW. The crash is caused by her seeing a strange apparition that John doesn’t see. John survives, mopes around for long stretches grieving over her, wonders about his wife drawing horrid mothlike figures in a notepad just before she succumbed in the hospital, and gets by for the next two years throwing himself fully into his work. He also can’t forget his wife’s last words to him: “John, you didn’t see it, did you?” John: “See what?” Mary: “The Mothman.”

On assignment to interview the governor of Virginia in Richmond, he somehow ends up at two thirty in the a.m. with car trouble in Point Pleasant, West Virginia, some rural town on the Ohio border and far from the destination he was heading to (He has driven 400 miles from Washington DC in 90 minutes). He knocks on the first house he sees to get assistance, where the occupant, Gordon Smallwood (Patton), who looks like a hill-billy and has a scruffy unshaven face, turns out to be an angry man pointing a shotgun at him while accusing him of knocking on his door the last two nights at the same time as now to stalk his wife Denise (Jenney). Local police sergeant Connie Parker (Linney), the voice of calm reassurance in town, is called and clears Klein after checking with his newspaper. She gives him a lift to stay the night in a motel while waiting for his car to be repaired. She also tells him some weird unexplainable stuff is going on in this town of late, and Klein gets curious because the same moth images his wife saw (a six to eight-foot flying creature with huge red eyes) is seen by a few others in town and the same strange voices are also reported. Klein talks to one local man who after hearing strange voices developed a permanent unexplainable blood-red splotch in his eye. With these images come strange hallucinations and dreams, and odd predictions about impending tragedies around the world. In one such message the exact number of people dying in an Ecuador earthquake soon comes true. Klein gets further spooked when he receives an otherworld phone call telling him about things only he would know about himself.

Fascinated about these bizarre visions he and the locals are having, Klein flies to Chicago to meet a reluctant occult scholar and author, Mr. Leeks (Bates), who is afraid to tell what he thinks but eventually tells Klein he’s in danger and should not return to Point Pleasant. He explains the moth phenomena as something that has always existed, but usually no one sees it unless they are in extreme danger. Mary probably saw it because she died from an undetected rare brain tumor, discovered because of the examination she received after the car accident. Klein saw them because he was sensitive to them and they have rewarded him with their visions they are able to see before he can, because they are better situated to see them than he is. Leek says they represent souls who have not accepted death and therefore have not departed the earth, and are living in limbo. That’s about as academic and as reaching as the film will become in explaining all the psychic developments to follow when Klein returns to Point Pleasant, despite the warning not to.

It was sort of fun to watch the smug Gere get a few scares, and to see how the ordinary girl Linney portrays give him enough room to fully love himself and indulge his handsome ego. Bates steals the acting chores, in his minor part, with his vigorous performance of a former academic who has become an edgy recluse because of what he has experienced from his contacts with the otherworld.

By the time the director realizes that this X-File episode type of a plot must produce some damage with all the setup time spent preparing the viewer for the worst to come, the film is nearly over. It, thereby, finishes its last 15 minutes with the collapse of the Silver Bridge in Point Pleasant. In the middle of this disaster our hero, Richard Gere, gets ready to shake himself out from his self-absorption and help the locals cope with the latest tragedy the Mothman predicts. This film saves some face by the restrained way it photographs the paranormal occurrences (it never even shows us the Mothman) and to its credit shuns needlessly violent action scenes. The director gave this flick a classy look; all it needed to be better than it was, was a richer story to go with that moody look. 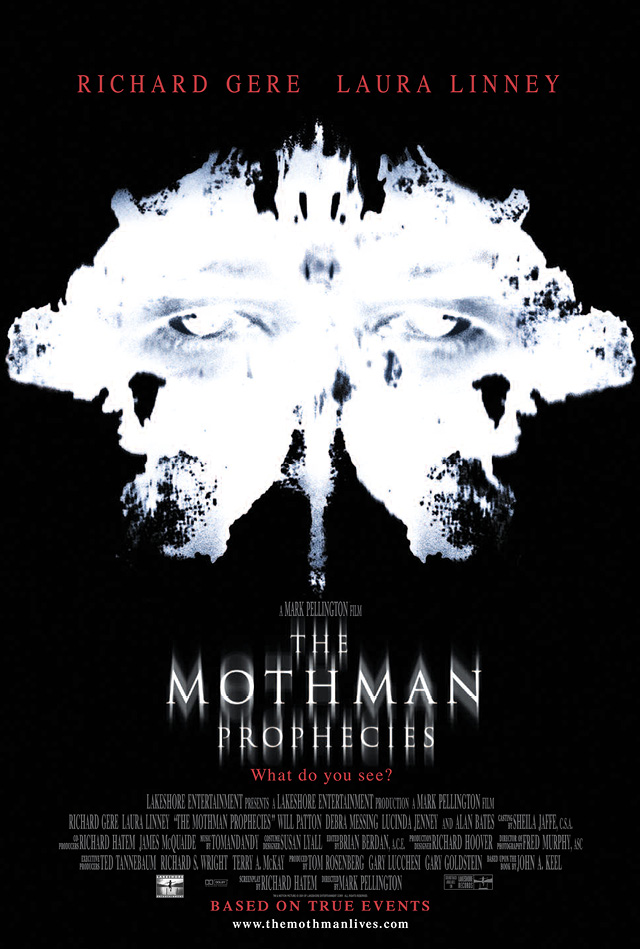