Mostly Martha is a middle-brow arthouse flick about a highly skilled but uptight thirtysomething single lady chef, Martha Klein (Martina Gedeck). She works in a posh Hamburg restaurant, and must because of necessity change her lifestyle and loosen up. The ingredients thrown together in this mostly predictable romantic comedy consist of too much sentimental goo and airy confections, and the laughs seemed canned and garnished from the medium of TV sitcom. Director and writer Sandra Nettelbeck — whose previous screen credits, not surprisingly, come from made-for-German TV movies — shows her insecurities as a filmmaker by telegraphing every important event by an unnecessary scene and repeating scenes without any purpose except to make sure the viewer gets the obvious message that love has been the missing ingredient in chef Martha’s lonely but orderly workaholic life.

What worked very well were the delicious food scenes that appealed to one’s appetite in a mouth watering way: where the chef talks passionately about preparing a tender pigeon with truffles dish, about the humane way to kill a lobster is by breaking its neck and not boiling it, watching her intensely cook her specialty of foie gras at just the right temperature, and her perfection as a first-class chef, one of the best in Hamburg, is shown in her cooking a variety of brilliantly looking different fishes and meats. The tense atmosphere in the working kitchen smelled just right and should appeal to the viewer with a culinary palate. But unfortunately, the script had to stop all this kitchen work and tell a story.

A car accident killing Martha’s sister leaves Lina (Maxime Foerste), her stubborn eight-year-old daughter, in her care. The Italian father Giuseppe has no idea he fathered a daughter and lives in an undisclosed part of Italy, but because the girl wants to live with her father Martha promises that she will try everything possible to contact him. The main part of the film tells about the difficulties Martha has in relating to her niece, who is still very upset about her loss and becomes difficult to talk to. Lina does poorly in school, refuses to eat, and since she can’t get a dependable babysitter and the girl can’t be left alone at night when Martha’s at work, Martha therefore has to take her to work which causes some additional problems. The starchy restaurant owner (Canonica) hires a master Italian sous-chef, Mario (Sergio Castellitto), to help Martha, but he has the opposite personality and disturbs her by bringing his free-spirited fun-loving lifestyle of laughter and song into the kitchen. The first time he pops his beaming self into the kitchen, you know his part in the film is to be the love interest of Martha. He also melts the chill Lina has in her period of mourning and through his charm gets her to eat some of his spaghetti offerings. He courts Martha by preparing tasty Italian meals of pasta, roasted peppers, and sauted eggplant, and in his climax move he blindfolds her and gets her to name the ingredients in the soup he specially prepared for her.

Of course, Martha is transformed by the love she shows to Lina and will receive that love back after the headstrong girl warms up to her. This proves to better therapy than the one she is receiving from her Freudian shrink (Zirner). To him, Martha only talks about the dishes she prepared.

The shots of Hamburg in all its dull tidiness and cold greyness were handsomely done. But what proved to be the film’s lifeforce was Foerste’s Lina, her performance was an emotionally rich and realistic portrait of a little girl who is confused by the tragedy that befell her and acts appropriately as a girl her age might under such trying circumstances. Sergio Castellitto was lively as the good-hearted lover, while Martina Gedeck was convincing as the compulsive chef who also had a big heart. Though this romantic comedy had the right message about bringing passion to one’s life as the true ingredient that keeps one human, it nevertheless failed to say anything except what was obvious. Mostly Martha got stuck in how predictable everything was and the sitcom happy ending with wedding bells about to ring, left the film simmering in that cliché. It also was left lingering with too many overdone scenes with Martha going into a funk over a messy kitchen and unrealistically tearing into customers who complain about her cooking. This mostly food-as-metaphor-for-life story, never got past the kitchen and never got past thinking how clever its metaphors were. 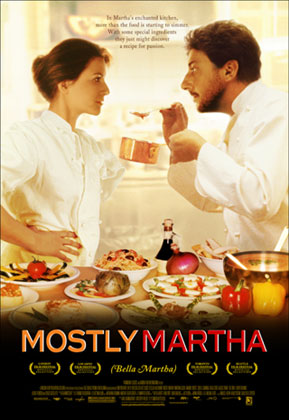