In 1944, on a bombing mission in France, RAF Squadron Leader David Scott (David Buck) is shot down and presumed dead, as his plane explodes. His best friend since childhood, Canadian-born pilot Quint Munroe (David McCallum), takes over as squadron leader. Air Commodore Hufford (Charles Gray) requests that Quint tell Scott’s widow Beth (Suzanne Neve) the news in person. It leads to a romance.

Quint’s Mosquito Squadron (consisting of twin-engine planes made largely of wood) is assigned to bomb a secret German plant used to develop a V-3 or V-4 super-rocket,located in a French chateau, in Charlon. On the mission, the squadron will deploy a new “bouncing bomb” called the “highball.” The men are anxious to attack the site, even if it’s risky. They learn through captured film that RAF crews are prisoners on the site and one of them is Scott. Tensions rise if the mission is worth it, if it means killing their own.

Filled with war drama cliches, wooden acting (except for Charles Gray) and unsatisfactory production values for a movie, it fails to excite. It only satisfies by using real footage of Mosquito Squadron planes and the air fight scenes are decent. 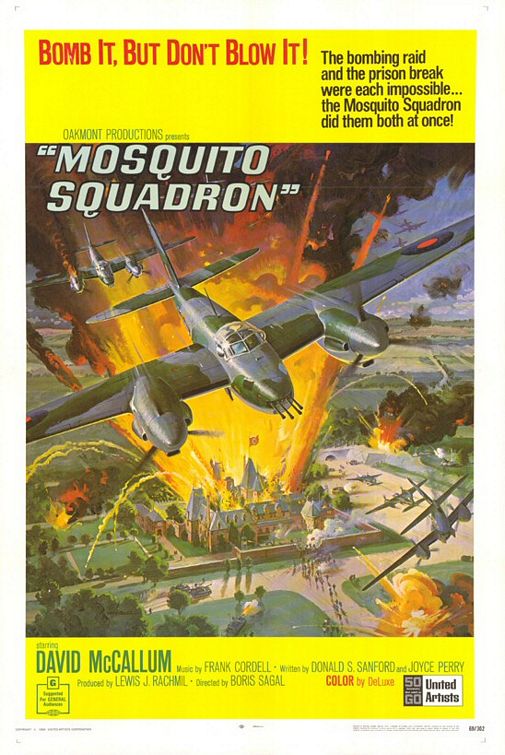