Katharine Hepburn, in her third film role and paid a whopping $7,500 for her three week stint filming Morning Glory, won the first of her four Best Actress Oscars for this backstage drama of Eva Lovelace, a star-struck, pretentious, aspiring young actress in a Vermont community theatre who comes to the Gay White Way to find success. It’s based on an unproduced play by playwright Zoe Akins and written by Howard J. Green. Director Lowell Sherman (“Born to be Bad”/”She Done Him Wrong”/”High Stakes”) keeps it old-fashioned by shooting it as if it were a play. The banal plot leaves a lot to be desired and the dialogue was overripe, but Hepburn’s snappy performance was irresistible–much better than the material. This led to a box office hit. It was remade less appealingly as Stage Struck in 1958 with Susan Strasberg.

In Manhattan, Eva shows up at the office of Broadway manager Louis Easton (Adolphe Menjou) and meets there kindly veteran actor Robert Harley Hedges (C. Aubrey Smith). Impressed with his proper British accent, she engages him to give her acting lessons. Meanwhile Easton and playwright Joseph Sheridan (Douglas Fairbanks, Jr.) are talking over casting for his new comedy, Blue Skies, which Easton is producing, and the producer wants his contract player, the temperamental Rita Vernon (Mary Duncan) cast in the lead. Though the friendly Eva makes the right connections, she hits a few bumpy roads. Things take a surprising turn for the better however when her elderly mentor takes the ambitious actress to a cocktail party given by Rita Vernon and she gets tipsy on champagne and performs two Shakespearean soliloquies with slurred speech. Her acting chops stuns the guests, especially her balcony scene from Romeo and Juliet. Thereby she gets hired to be the understudy for Rita. On opening night oily producer Easton doesn’t pay Rita enough and after they argue she’s fired. Eva brilliantly takes Rita’s place. Backstage following her triumphant performance, she is lectured about such fast success going to her head by Hedges. He equates it to a “morning glory” which blooms beautifully, but then quickly withers and dies. The last scene has Eva embracing her dresser Nellie (Helen Ware), a former Broadway star who quickly faded from the spotlight, and defiantly tells her “that they are trying to frighten me into being sensible, but they can’t do it. I’m not afraid of being just a morning glory.”

I was more taken down by the, at best, second-rate serviceable story than I was uplifted with Hepburn’s bravo performance. 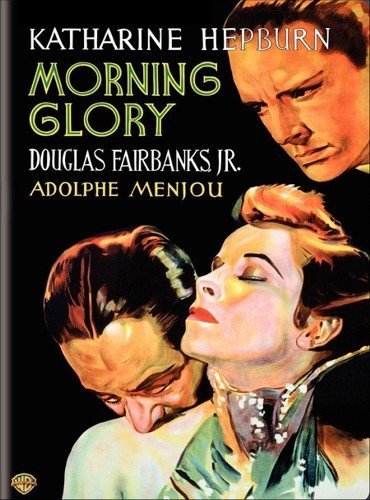