THE MOON AND SIXPENCE

It’s loosely inspired by the life of Paul Gauguin, a stodgy English stockbroker who abandons his middle-class life and family in London to go to Paris to start painting at age 40. Albert Lewin (“The Picture of Dorian Gray”/”Saadia”/”Pandora and the Flying Dutchman”) adapts and directs this low-budget production based on the Somerset Maughan 1919 novel. This is what goes for a sophisticated Hollywood drama. The film’s black-&-white photography gets tinted amber when transported to Tahiti, and in the last reel to full color when showing the paintings. It’s somber stuff, but faithfully executed by Lewin‘s literary direction.

It tells of the contentious life of Charles Strickland (George Sanders), the stand-in for Gauguin. He’s viewed after his death when acclaimed a genius painter by the world, as the novelist Geoffrey Wolfe (Herbert Marshall) reviews his life. He views him as an anti-social cad, who coldly abandons family for Paris to be a painter. It shows that he becomes a great painter in Tahiti, and dies of leprosy on a South Sea island before fame reaches him.

It can only be faulted for its need to apologize for the artist as a selfish monster in its ending, otherwise it’s a solid drama. 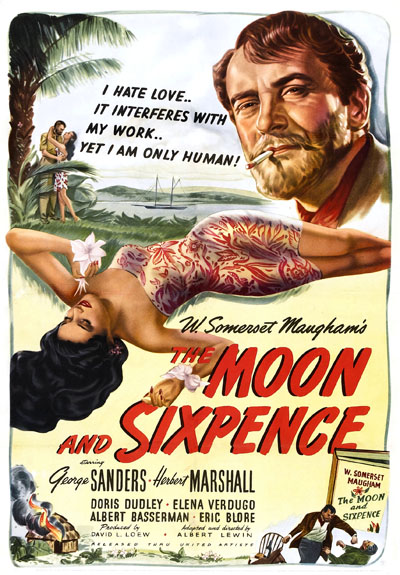