MONSTER THAT CHALLENGED THE WORLD, THE

An enjoyable but poorly made monster film that should satisfy those whose expectations are low and for those who love a bad pic. The film’s theme of mutant monsters affected by atomic radiation being a danger to humanity, reflects the paranoia of the time.

Beefy Tim Holt, as Commander Twillinger, is the rigid new “by the book” Head of Naval Intelligence of a naval base in the California desert that is surrounded by the Salton Sea and where there are secret experiments going on in a top-secret lab in a remote part of the base. The hard-working and serious-minded Dr. Rogers (Hans Conreid) is the chief scientist.

As the film opens, a Lt. Hollister goes on a routine jump mission. But when the two seamen, Johnson (Jody McCrea-son of Joel) and Sanders, go to pick up the parachutist by boat at their contact spot near the research lab, they find he’s missing. All three are killed by a giant mollusk rising from the depths of an undersea cavern. Hollister’s body is discovered shriveled up and all his blood sucked out by puncture wounds, while Sanders is killed by fright, and Johnson remains missing. The rescue team recovers a sticky slime substance from the monster that is radioactive and divers uncover a giant egg from the creature in depths of water that is deeper than first thought. They put the egg in Dr. Rogers’s lab for experimental purposes. Rogers mentions as long as the unguarded tank is kept at a low temperature of 38 degrees, there’s no chance of the egg hatching and becoming a danger.

Twillinger takes charge of investigating the murders, and is impatient for results as he storms Rogers’ lab.

Finally Rogers determines the mollusks threaten world destruction and are contaminated by atomic radiation. He also states that all the creatures and the thousands of eggs they are capable of laying must be destroyed. He can’t explain what caused them to now appear, but guesses it could be a flash flood caused by an earthquake that freed some prehistoric eggs from under the sea. In the midst of this perilous discovery Twill becomes attracted to Rogers’ attractive secretary, Gail (Audrey Dalton), who is a pilot’s widow and has a friendly young daughter Sandy (Mimi Gibson). Twill loses her ladybug and shows he’s human, as he goes down on the floor with Sandy searching for it to appease the distraught Sandy and score some Brownie points with mom.

The sheriff’s department cooperates with the military and gives the public a false story as to why the beach is closed to swimming (the public be damned is the message!). Mrs. Simm’s daughter Jody sneaks off with her navy boyfriend for a moonlight dip and the mollusk chomps on them in a hunger attack (swimming on a date is seen as dangerous if mom doesn’t like the boy chosen).

The military is now doing all it can to locate where the creatures nest, and believe they have secret paths through the huge canal system leading up the Southern California Valley. They get all the canal gatekeepers to keep an eye out for the creatures, as they hope to dynamite them when found. Naturally a cynical gatekeeper gets a fatal visit from one of the monsters, as soon as he suggests this is all nonsense. But Twill is too thrilled to dwell on that sad event when he learns that Gail is free that night to dine with him in an upper-scale Mexican restaurant. She had been keeping scientist/diver George Blake’s wife Connie company after the monster had him for a snack on one of his diving missions, and she now eagerly goes after this humorless but eligible bachelor when Connie pulls a Garbo and says “I want to be alone.”

Mr. Dobbs – the most amusing character in the pic, is the obsessed town records employee, who moans about Propostion 14a being defeated and him not getting a larger document room. But he comes through by locating an old Indian map owned by the founder of the town, which shows spots where they built wells the creatures could travel through the canals. This is all the info the military men need, as workaholics Twill and Rogers lead the demolition charge against the creatures.

But, alas, danger lurks in the lab, as Sandy was left alone to play in the top-secret lab (it sounds like Los Alamos isn’t the only place with security breaches). She turned up the tank’s temperature because she felt sorry for the cold rabbits in the cages. As Rogers and Twill return to the lab, satisfied that they saved the world by killing all the creatures, they discover Gail and Sandy barricaded in one of the rooms as the monster is breaking down the door and about to pounce on both the strangely smiling girl and her mom who is fearful. Twill eschews the ax on the wall to give the monster the fire extinguisher steam treatment instead and saves his future squeeze from being crushed by the monster. He also tells the dumb little girl, it’s OK you can go swimming from now on.

I can’t tell you why I liked the pic, it certainly wasn’t for artistic reasons. Maybe it’s something that I ate that evening! Maybe I like monster pics where the special effects are of the lowest caliber and the rubber monster looks about as scary as a rubber duck! 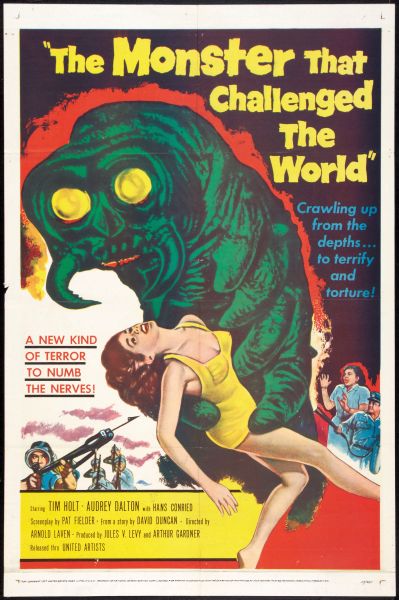