A snappy coming-of-age screwball comedy helmed by the fortyish Noah Baumbach (“While We’re Young”/”She’s Funny That Way”/”De Palma”) and co-written by Baumbach and co-star Greta Gerwig.

The 18-year-old Tracy (Lola Kirke) moves for her first fall term to NYC, in a college dorm, while a freshman at Barnard. She was home-schooled, living with her divorced mom (Kathryn Erbe) in the New Jersey suburbs. Rejected by Mobius, the college’s snobby literary society, the aspiring writer is comforted by Tony (Matthew Shear), also a literary student rejected by the society. When Tony rejects Tracy’s love interest for another co-ed, Nicolette (Jasmine Cephas Jones), the lonely student phones Brooke (Greta Gerwig). She’s the adventuresome achievement-oriented motor-mouth 30-year-old daughter of the geologist her mom plans on marrying on Thanksgiving. Brooke lives in a Times Square apartment.

The lady opposites, as a matter of convenience, bond as stepsisters. The intense but subdued Tracy can’t get her act together in the college and mopes about complaining to mom about not getting to meet anyone, while the bubbly and zany Brooke schemes to become successful and rich as a restauranteur-designer-musician–SoulCycle instructor. When the two hook up together they go on a series of misadventures, which in the end takes them to the wealthy community of Greenwich, Connecticut, for the film’s centerpiece sketch. They visit Brooke’s ex-friend Mamie-Claire (Heather Lind) whom she claims stole her idea for designer T-shirts and her wealthy fiancee, Dylan (Michael Chernus), who married Mamie-Claire. Meanwhile Tracy has started writing about Brooke and plans to turn in this story, entitled Mistress America, to the literary society. When Brooke learns of this their friendship is threatened.

The film adds its voice of approval to those who make their own way through life without outside approval. It’s a fine example of moderns emulating how the great Preston Sturges did screwball comedy back in the 1930s and 1940s. 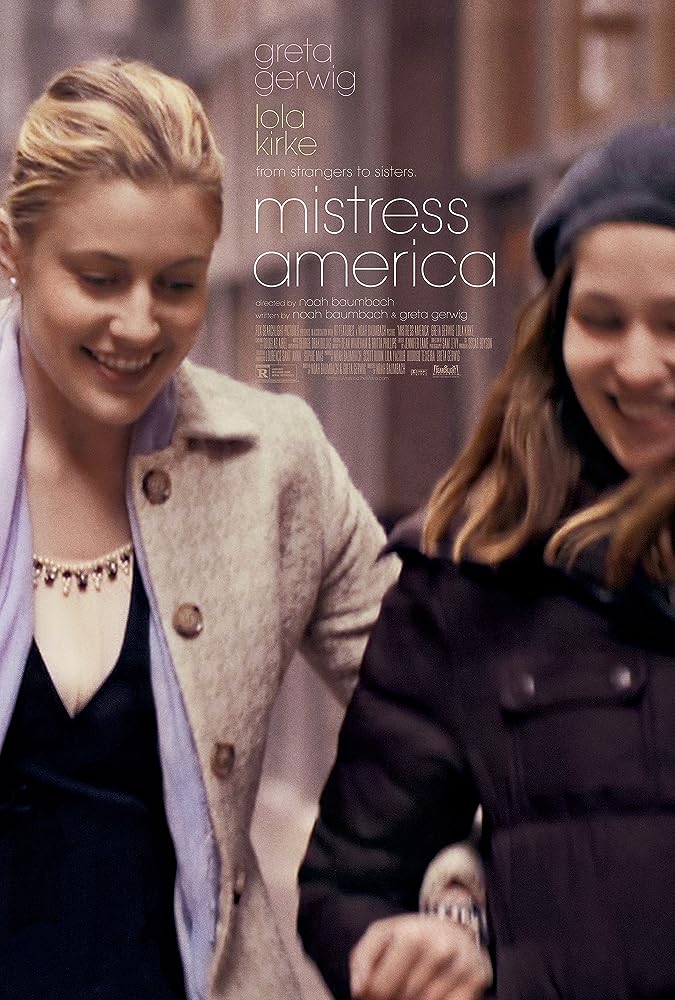