A lighthearted-thriller directed as a black comedy by William Castle (“The Tingler”/”13 Frightened Girls”/”I Saw What You Did”). It’s based on the 1963 novel by Canadian author June Skinner, writing under the pen name Rohan O’Grady, and is written by Mark Rodgers. No Castle gimmicks here, but lots of nonsense. It has kids in danger of being killed by a war hero, only to turn the tables on their intended murderer.

The pic opens with millionaire industrialist Russell Harrison dying in a bloody nighttime car accident. This leaves his obnoxious braggart spoiled 12-year-old son Barnaby Harrison (Pat Cardi) as an orphan to be placed in the care of Russell’s brother, Major Kevin Harrison (Nigel Green) – British Intelligence, World War II hero. Uncle Kevin is next in line for the $5 million inheritance. Uncle’s famous for writing a book called “Killing the Enemy,” and lives alone on the secluded Caribbean tropical Serenity Island. Barnaby is escorted there by boat by police Sgt. Frank Travis (Robert Pickering). Also on the trip is the sassy American southerner, the 12-year-old Chrissie (Mary Badham), traveling to stay with her pretty divorcee Aunt Justine (Linda Lawson). Chrissie’s mom deserted a year ago and her father remarried, and the trailer-park kid was not wanted. The kids, from opposite sides of the tracks, fight with each other, and take a strong dislike to each other.

On the island, Barnaby is told by his amiable but wicked uncle “You’re a charming child, Barnaby, but five million dollars charming you are not.” Uncle just before hypnotized his charge and directed him to jump off a cliff, but Justine while strolling along the beach spots Barnaby and saves him by calling out to him and breaking his spell. When the kid tells the adults about uncle’s intentions, they are skeptical. So Barnaby gets Chrissie’s help to take the offensive and kill his uncle first (following along with the theme that kids must stick together against adults in such emergencies).

For scares there are the following: a legless native fisherman on a cart (Reff Sanchez) living alone in a dilapidated hotel, poison mushrooms, fire, a tarantula crawling over someone’s sleeping face, and a shark-infested murky swimming pool.

The uneven comedy is out of sync, with Green giving a charming winking performance while Cardi gives an artificial grating performance that leaves him an unsympathetic kid victim to an adult. All the intended murder scenes are awkwardly staged without any sense of urgency and thereby seem unconvincing. 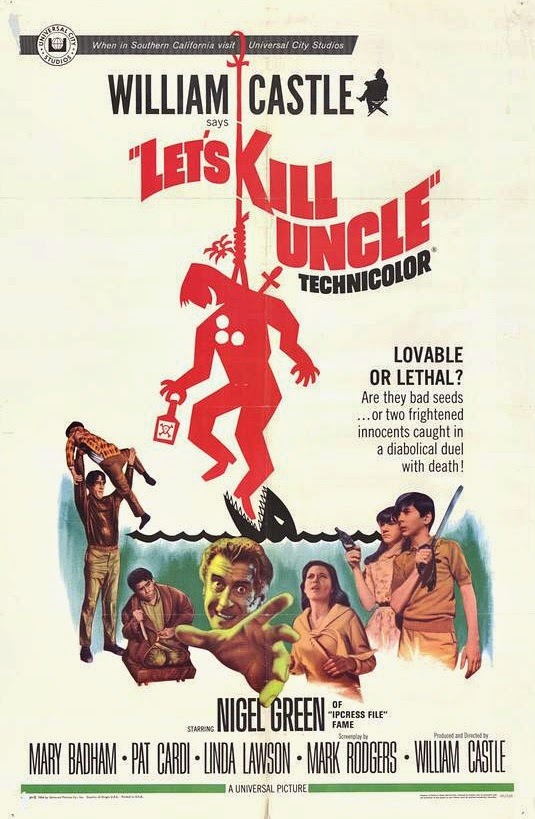