An example of great Iranian filmmaking. Jafar Panahi (“The White Balloon”- 95/”The Circle”- 2000), a disciple of the world renown director Abbas Kiarostami, directs this realistic kidpic and furthers the theme both directors savor of blurring the lines between reality and filmmaking (illusion). The questions it poses about cinema and the viewer’s attitude, is stimulating and gives new life to the meaning of cinema and presents new challenges in how to make worthy films. The realistic part of the film presents unforgettable images of a bustling and optimistic Tehran, plus it offers a political metaphor through its story of a little girl who is lost when trying to go home alone. The call for freedom and finding the road home is seen through a child’s innocent eyes, as she allows us to see how she views the adults she’s completely dependent on. The Iranians must rely on their government to make the right decisions for them, and are just as dependent on them as the girl is on the adults. It leaves hope that the totalitarian Iranian regime and the fundamentalist Islamic grip the mullahs have on the country hasn’t quelled the thirst of all the Iranians for a more tolerable and peaceful way of life, as there are those who have not stopped believing that they need more daily freedom in their lives. This strong-willed girl represents the future, someone who as an adult might not be that docile to be shunted aside in a stereotype female role and forced to blindly follow the rigid Islamic law.

Mina is a feisty second grade primary school student dressed in the traditional garb of a chador, and she also has one arm in a sling. Her pregnant mother who works nearby fails to pick her up after school. Mina waits by the school gates, but is worried when her mother doesn’t appear to be coming and the school is deserted as all the children left by school bus already. She gets the attention of Mrs. Sadeghi who works at the school and the lady gets her future relative through marriage, the father of her son’s soon-to-be bride, to give her a ride by motorbike to the bus terminal (why in the world Mrs. Sadeghi doesn’t go into the school and call home for the little girl is never brought up!).

The girl impulsively gets off the motorbike in the crowded thoroughfare before reaching the terminal when Mina thinks she recognizes her mother on one of the buses, but she finds she’s mistaken. Mina then hops on the same familiar bus by running to catch it at the next stop and goes to the back of the bus where the women, the country’s second-class citizens, must sit (it makes one think of southern segregation), and the women chatter away showing that all’s not rosy in the country while the bus moves slowly in heavy traffic. A bitter old woman makes Mina give up her seat to a woman with a child and complains how the youth of today don’t respect their elders and how rotten her own children treat her. Colorful musicians serenade the bus and receive gratuities from the women. One young woman is telling another about a husband who is cheating, another gossips about how terrible it is that someone she knows married an older man with two kids and now has his name on her passport, and all the while the worried little girl sits in silence and is utterly confused about where her stop is. She doesn’t know the name of her stop or her address, but can recognize and describe it. At the last stop she sobs when she learns from the bus driver that she’s on the wrong line, but the friendly driver gets his colleague to take her to the right stop on the next bus to leave.

Meanwhile the city is buzzing with an important soccer game played between South Korea and Iran, and on the radio the game is broadcast and is heard throughout Mina’s odyssey. Nationalistic pride is bursting at the seams, as it’s learned that Iran was losing but their star Ali Dai scored a goal to put them ahead.

At the film’s thirty-five minute point when Mina seems to be safely on her way home, she surprises us by taking off her sling and announcing she doesn’t want to act anymore. The disappointed filmmakers decide to keep the mic on and secretly film her as she tries to get home by herself, and the director plays further with reality by allowing the film to be played even after the equipment stops working at times–there’s dead sound and blurry shots. The point made is that sometimes Mina forgets if she’s acting or is really herself. In one revealing scene she tells a friendly adult she didn’t want to be in the film anymore because the kids in her school would see her crying and think she’s a baby. In another scene she meets the bitter old woman from the bus on a park bench and tells her she’s no longer in the film, and the woman freely says when asked about her film role that she wasn’t given a script but just told to act natural.

The overall theme therefore changes from the realism of the lost girl trying to get home (a political metaphor), to one of determining how films affect the lives of those who view them (an artistic metaphor). It becomes a film within a film that reveals the art that goes into making a film.

It makes for a most fascinating film, one that breaks new ground and challenges Hollywood to look more closely at the product it’s putting out and the tremendous influence it has on the world market. It seems astonishing that a country like Iran, which has a government censor for films, can make a film like this that makes you think and is more challenging than most films put out by Hollywood with all its freedoms, big-budgets, special-effects and pools of talent. 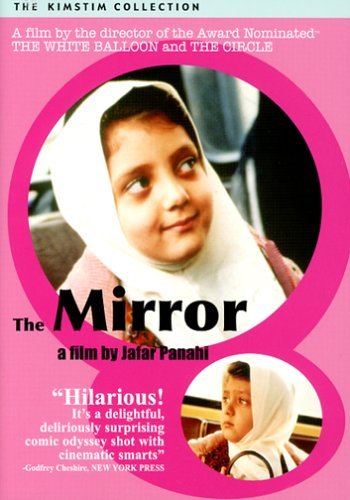 MY UNCLE FROM AMERICA