“It’s an imaginative film that gets lost when it goes too far into the woods.”

Cult filmmaker writer-director Ben Wheatley(“Rebecca”/”Kill List”) starts off with an ordinary creepy horror pic set during a pandemic that soon ventures into more ambitious and darker territory, as Wheatley returns to the genre where he earned his rep and seems at home in its strangeness.

The story’s inspired by real life events, and is motivated by the sci-fi premise of a connected eco-system that has its own thoughts and goals. This is a psychedelic horror pic, with an eerie mood changing score by Clint Mansell and daunting photography by Nick Gillespie. Its experimental ending is trippy, effectively using strobes, Mother Nature and colors to give us some bad acid trip chills. But it lost me when it tried explaining over and over again to no avail its convoluted myth.

When a disastrous virus invades the planet for the past year, a scientist from the city, Martin Lowry (Joel Fry), comes with needed measuring equipment to research soil fertility in a remote English forest. His former colleague, Dr. Olivia Wendle (Hayley Squires), has already set-up a research station there but she hasn’t been heard from in months and he wants to find her.

To get there, Martin is escorted on a two-day walk by the park ranger Alma (Ellora Torchia). At night, the journey is scary, as in the darkness strange noises and things come to life. The two are attacked by an unknown person and his scientific equipment is stolen as well as their shoes. We’re made aware by the guide that the forest has a weird strangeness and the village has spread the mythic tale of a fairy-tale creature roaming the forest to keep visitors out. Though Martin only encounters campers and squatters, who are running away from the pandemic. One such back-to-nature squatter, who might be insane and could be either a good or bad guy, is the wild-man Zach (Reece Shearsmith). Zach’s motivations for squatting in the woods is not made clear and his plans for the visitors seems unclear–but he does supply them with replacement shoes and stitches up Martin’s foot wound.

Things take a turn for the sinister, as the travelers reach Olivia’s location and the plot tries to get ironed out. But Olivia’s speeches praising trees for having a brain (trees are her research project) was too much schlock to handle and brought the plot into B-film territory.

Generally the actors give rich understated performances (as noted before, Squires goofy performance might be the only one that missed the mark); the woodland story to its credit is unpredictable, catchy and weird; the grisly horrors depicted work fine even when inducing comedic responses and its positive message about human ingenuity is a hopeful one. Nevertheless its science is strained and its mythological expositions are far from convincing, as it left me more confused than ever by all the explanations. It’s an imaginative film that gets lost when it goes too far into the woods. 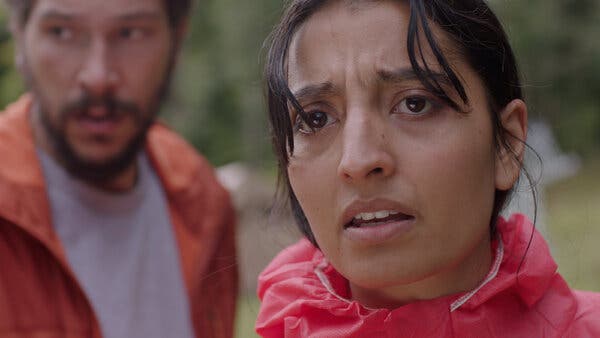