Director Spike Lee’s (“School Daze”/”Do The Right Thing”/”Jungle Fever”) sentimental, socially conscious World War II drama takes too long to get to its one moving moment at the end. The clunky World War II pic, trying to reach back and grab what John Wayne pics did for the war, has Lee show us his noble intentions but can only come up with a messy and pointless film. What it does best is cover the seldom filmed efforts of the black American soldiers during the war and the open discrimination they faced from the white brass, but unfortunately does so in a ham-fisted manner.

Lee takes us through an opening murder mystery in 1983 in a Manhattan post office and then through flashback he chronicles four black American soldiers of the 92nd Infantry Division (in a segregated all black unit known as the Buffalo Soldiers), who are in Tuscany, in 1944, where they are trying to get at the well-fortified Nazis and determine their position.

Hector Negron (Laz Alonso) is a peaceful, devoutly religious sixtysomething Puerto Rican postal worker living in Harlem, a recipient of the Purple Heart, who for seemingly no reason flips out and shoots with a German Luger an Italian man who comes to his window to buy a stamp and remains mum why he did it. In the search for his reasons, the cops come across in his apartment the valuable marble head of an Italian statue from a destroyed Tuscany bridge.

The flashback to the WW II front lines has four black soldiers crossing a river onto German held turf and, shortly, ending up bunking down in the tiny medieval village of Colognora. The men are the idealistically noble Second Staff Sergeant Aubrey Stamps (Derek Luke); the lothario gold-toothed Sergeant Bishop Cummings (Michael Ealy); the platoon translator Cpl. Hector Negron-who is the one standing trial for the post office murder some 40 years after his army duty; and, the gentle buffoonish giant, PFC Sam Train (Omar Benson Miller).

Train rescues an 8-year-old boy, Angelo (Matteo Sciabordi), living alone in the war zone and from hereon watches over the helpless Italian child. The black soldiers are trapped behind enemy lines and hole up in a family home that has a fascist father, his flirty pretty daughter, Renata (Valentina Cerri), whom the ladies man Bishop desires. It seems to take an eternity for the story to get untracked as it loads us down with subplots that include quarrels among the extended host family on whose side they are on and a partisan traitor who betrayed his people by setting up a massacre at the church of St. Anna. Time drags further, as at every chance Lee can get there’s something involving how badly the white brass treated the black soldiers who were ordered to stay put until they could get a German prisoner.

Our heartstrings are pulled as the devoutly religious Train is an innocent willing to do anything to protect the kid, who tugs at his legs and calls him in Italian the “Chocolate Giant.” But the four main characters are hardly memorable, except for Train because of his size and big heart, as they blandly fit cardboard symbolic one-dimensional characters. Lee’s film has an agenda to show Hollywood that the war had black faces and they were just as heroic as the whites. But this one lacks a good script (it was poorly written by James McBride, the author of the novel the film was based on) and becomes more tedious than any war film John Wayne made. 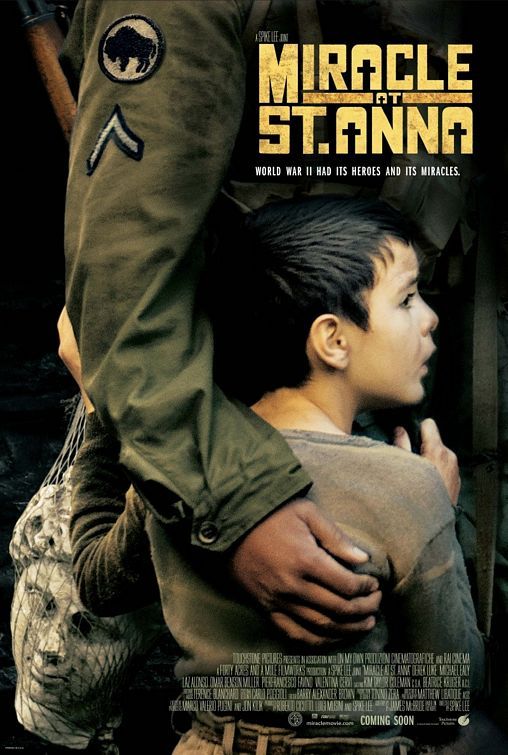