Jason Reitman (“Thank You for Smoking”) effusively directs in a cloying cutesy style this totally solid teen comedy. It’s written in a hipster lexicon by Diablo Cody, a professional stripper-turned-writer. It spins its wheels along the ‘Knocked-up’ anti-abortion propaganda tract, giving Hollywood a leg up in smoothing over the controversy by covering both sides of the controversy. The tale of a single teen who is pregnant is told from her viewpoint, as she vents her feelings through wisecracks in a snarky narration throughout the film.

Sassy and glib 16-year-old smarty-pants Juno (Ellen Page, a 20-year-old from Nova Scotia) is named after Zeus’ Greek goddess wife who was “very beautiful and very mean, like Diana Ross.” Juno discovers she’s two months pregnant after a one-night sexual experiment with the socially awkward brainy dork named Paulie Bleeker (Michael Cera), and runs home with sexually active friend Leah (Olivia Thirlby) to tell her concerned nice guy dad (J.K. Simmons) and practical-minded supportive stepmother Bren (Allison Janney) the bad news. Juno then tells her suburbanite parents she placed an ad in the Pennysaver to put her child up for adoption, and has found the perfect couple. They are a composer of jingles for commercials Mark (Jason Bateman) and his ‘eager to be a mother’ wife Vanessa Loring (Jennifer Garner)–who can’t conceive. Juno develops a rapport with Mark, and is happy that the baby will have a good home in a pleasant suburban environment with the affluent and kindly couple. The twist in the story comes about when Juno discovers there’s a hitch in the perfect couple and has to use her smarts to know how to handle a slight change in plans. By making a number of adult decisions, Juno grows up and discovers more about herself.

The hipster dialogue includes the following: “He’s the cheese to my macaroni,” kissing while pregnant is referred to as “sucking face,” the fetus is described as a “sea monkey” and the pregnancy positive result is called by the druggist as “One doodle that can’t be undid.” It reminded me of an updated ’30s screwball comedy, that did the trick of being a feel-good crowd-pleasing story and at the same time talking sensibly about a real problem faced in contemporary times. That’s not an easy trick to do, and this film manages to be quirky and sensible at the same time–which earns it my kudos. 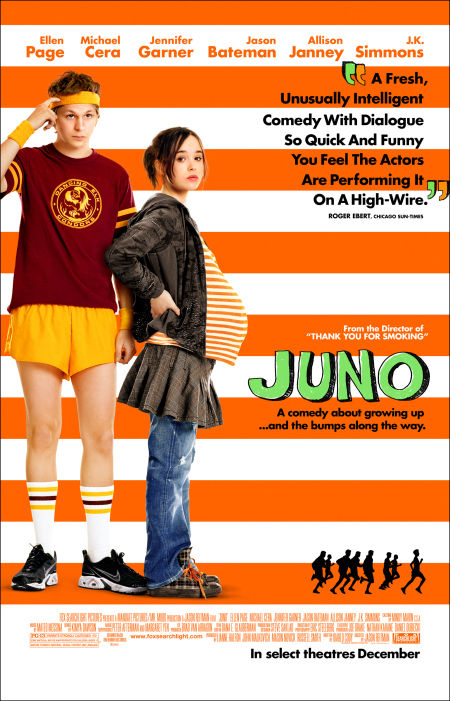