“This creepy serial killer tale had more fright in it than the more highly touted Felicia’s Journey.”

This creepy serial killer tale had more fright in it than the more highly touted “Felicia’s Journey,” and was a superior telling of a homicidal maniac on the prowl story than was the more flamboyant “American Psycho.” “The Minus Man” stars Vann Siegert (Owen Wilson) as an affable, clean-cut, blond drifter, with a bland personality, who is someone who offers no reasons for what he does except some vague philosophical explanations as he talks into his miniscule tape recorder revealing his private thoughts: “I look for the meaning of things and act upon it at the spur of the moment. I take the natural momentum of a person and draw it towards me. You don’t always choose what you do, sometimes what you do chooses you.”

Hampton Fancher, “The Blade Runner” screenwriter and the first-time director of “The Minus Man,” creates a film that sets a dark mood of everyday normal life. Serial-killer Vann, who looks like the average “Joe,” easily fits into his surroundings. He drives his blue pickup truck from the Pacific Coast hiding the poisons he got in the woods, underneath his truck. He is such a well-mannered and congenial young man, whose appeal is supposed to make us irritated that we can like him knowing that he is a serial killer. He even tells us in his narration how good he feels about himself, as he crows that he does his killings with the minimum of violence.

The film opens when Vann enters a nearly empty roadside bar, pays an attractive alcoholic’s bar tab (rock star Sheryl Crow), gives her a lift, watches her get high on smack and then offers her a poisoned drink of Amaretto from his flask for a quick and painless death. The emptiness of Vann’s action and the film’s emphasis on his charms while keeping his past mysterious, adds chills to the story.

Vann spends the night asleep in his truck by the beach, but is awakened and questioned by a state trooper about why he is in an off-limits area. But, because he is so polite, he does not arouse the trooper’s suspicions and therefore no search of the vehicle takes place. He shows up the next morning in a sleepy West Coast suburban town and rents a room in a cottage from an unhappy middle-aged couple whose daughter they tell him is away in college. Later on it becomes evident that she must be missing, or ran away, or is dead (it is never explained which).

Jane (Mercedes Ruehl) is at first suspicious of the renter, but Doug (Brian Cox) takes to him right away and gets him a temp job for Christmas in the local post office. Doug, lonely for companionship, takes Vann to the local high school football game, where he meets the star player (Mabius) afterwards in a restaurant. He next meets the athlete before a big November game and gives the football player with the promising future in the F.B.I. a lift in his truck, and allows him to have a few swigs from his poisoned Amaretto flask. He even joins the search party looking for him when he is reported missing, even though he knows that he has already buried him somewhere out of their sight.

Vann often has vivid fantasies that he is being vigorously interrogated by a pair of rough detectives (Dwight Yoakam and Dennis Haysbert) who have been tracking him down and suspect him of being the serial killer, but can’t come up with the proof (like everything about Vann, it is never made clear whether this is a projection or had actually happened or will happen in the future).

While working at the the post office Vann impresses his supervisor (Rey) that he is a diligent worker, so he is given even more responsibilities. He even subs for a letter carrier who is ill. The routine work seems to agree with him, as he mentions that this is the best job he ever had. At the workplace, his co-worker, Ferrin (Janeane Garofalo), finds him appealing and tries to make herself available to him. This is a different kind of part for the usually gruff Garofalo. Here she plays a sweet, vulnerable girl who wants a serious relationship, but has trouble getting the shy Vann in an amorous mood and when she does succeed, he is so awkward in his physical advances that she is scared off by him.

This is a film about the banality of evil. Owen Wilson gives a strong performance as a disarmingly evil person. Janeane Garofalo and Mercedes Ruehl are fine in their supporting roles, completely believable as women who need a man in their life to feel fulfilled. The film gets over, despite the serial killer being someone whom we can never understand or come to terms with because we are not given enough info.

What makes this film particularly engaging, at least more engaging than most of the serial killer films I have seen recently, is the emphasis on the sickness in society as a reason why these weird things happen. What is left unsaid is that we should start looking for answers where we haven’t looked before. I just wish this film had more of a feeling for what it was up to, offering us something more revealing than just surface things. 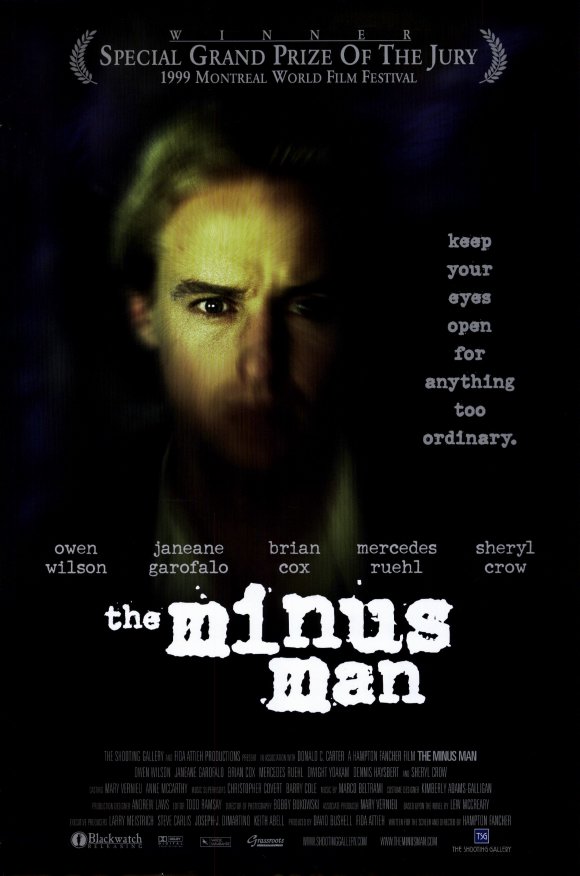