“A great performance as the relentless gunslinger by Cameron Mitchell gets this one through some bumpy patches.”

An early Western from the noted Italian director of spaghetti westerns, Sergio Corbucci (“Django”/”The Big Silence”/”Companeros”), whose flawed film nevertheless shows off his talent for getting the most out of shoot-outs as he goes on to a very successful career. It’s an action-packed tale about a wrongly imprisoned convict with failing eyesight escaping to clear his name. The revenge story is muddled and has too many holes in it to make sense, but a great performance as the relentless gunslinger by Cameron Mitchell gets this one through some bumpy patches.

After the Civil War, Minnesota Clay (Cameron Mitchell) escapes a Union army run forced-labor prison in New Mexico, noted as the worst on in the country, and returns to his dusty hometown in New Mexico to find out that his star witness failed to testify for him because he was the one who framed him. Minnesota quickly learns that Fox (Georges Rivière), his supposed witness, has taken over the town with his gang and appointed himself sheriff. All citizens are forced to pay him protection money for previously running out of town a ruthless Mexican gang led by General Ortiz (Fernando Sancho). The Mexicans hide in the hills in the outskirts of town and still carry out raids, waiting to overtake Fox.

Minnesota pays his respects at the local cemetery to his late wife Elisabeth Mulligan, who died in 1866, and stays in the humble ranch of the teenage girl Nancy (Diana Martin) and her impoverished blacksmith uncle guardian Jonathan (Antonio Casas) while he plans his next move. Uncle keeps from Nancy the secret that her father is Minnesota. The friendly socially awkward neighbor, Andy (Alberto Cevenini), tries courting Nancy and is willing to help the family anyway he can.

When Minnesota is betrayed by Ortiz’s mistress, the unfaithful Estella (Ethel Rojo), he has to fight off the attacking Mexican gang at the ranch and then clean-up the town from Fox’s gang while growing increasing blind. In the final shoot-out, with the evil Fox and his five goons, the film has its best action sequences as a battered Minnesota can’t see but uses his now highly sensitized hearing to aid him.

There were two endings shot, a happy one and a downbeat one. I fortunately saw the latter, and couldn’t think of the film ending any other way. 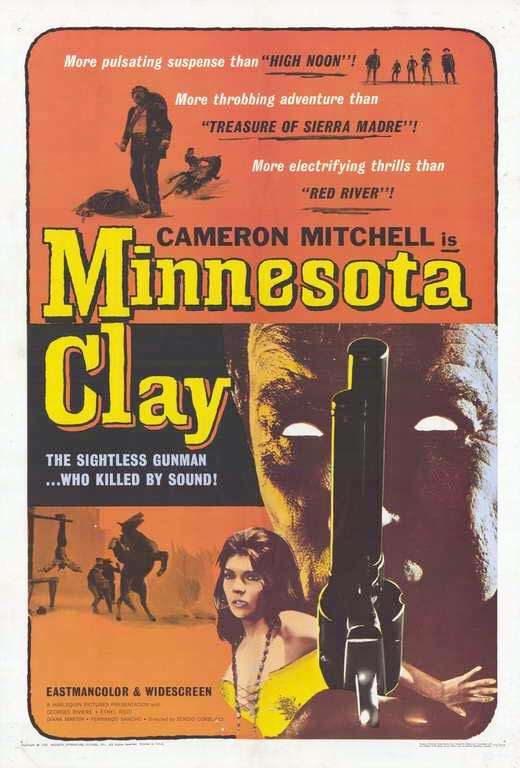