“So much is thrown into the mix, if you don’t like one twist in the story there is another to come shortly.”

Given the context of the material for this pulp thriller, it is surprising that this English speaking Chabrol film set in St. Tropez is as diverting and suspenseful as it is. Credit must be given to Chabrol’s ingenious script and the fine acting performances, especially Romy Schneider, Jean Rochefort, François Maistre, and Pierre Santini. The story line starts off simply as a case of a boorish wealthy husband, Louis (Steiger), and his attractive younger wife, Julie (Romy), having a bit of a row in front of Julie’s new acquaintance, her handsome neighbor Jeff (Paolo), who introduces himself as a hack writer. Soon, Louis drunkenly asks his wife in front of Jeff, “Why don’t we ever make love?”

An affair between Julie and Jeff begins as soon as Louis retires for the night; and, with Chabrol you know that is just the beginning of more strange things to come.

Chabrol will go on to explore his usual themes he uses to belittle the bourgeois lifestyle, to question why sex is the most important thing in a relationship, and how money is such a psychological part of one’s mindset. This is all done as the cheating couple decides to kill Louis and dump his body in the sea so that Julie can inherit everything, their thinking is that when things quiet down they will get back together.

A visiting Paris police inspector and his friend, the local police inspector, take an interest in the case, suspecting foul play, never convinced of Julie’s story that her husband is missing. They come to the conclusion after a spirited conversation about the case over some hearty meals and good liquor, that she is having an affair with Jeff. Important clues pop up: her missing earring is found in Jeff’s apartment, an envelope addressed to Jeff that is postmarked after her husband was reported missing is found in the front seat of a crashed car over the side of the seacoast, a car that Julie told the police her husband loaned to Jeff. Then there is the information they gathered from Louis’s doctor, that Louis made up the story of having a heart condition because he was ashamed of his impotency and wanted Julie to think that he couldn’t perform because of his bad heart. The gut feeling of the police, is that Julie and her boyfriend killed Louis and dumped his body in the sea. But Julie’s lawyer, Mr. Légal (Rochefort) — you just can’t top that for a lawyer’s name — goes about his lawyer’s business in an abrasive and madly befitting way, using logic and the command of his wit to the nth degree to get his client cleared of all the circumstantial charges. Mr. Légal is a pip, a pleasure to see on the screen. He is a character nonpareil, played to perfection by someone who, despite his small part, becomes a memorable part of the film.

Just when you think you got what is happening, the twists keep coming. Louis comes back and gets to have sex with Julie on the expensive carpet, just like she did with Jeff. He tells her he’s a new sexual man because of watching her with Jeff (too bad they didn’t have Viagra!). A little Freudian transference is thrown into the stew as Louis goes on to boast how he outfoxed the couple by staying sober one night to spy on them, aware of their love making and plans to do him in. He, thereby, jumps Jeff first, throwing him into the deep blue sea. But if you think you got where the story is going now, you better get ready for a few more curve balls thrown your way because Chabrol is going to town with this thriller.

The outcome is a satisfying romp, though if you start to think of what occurred — of relationships changing every reel, of those who are dead, not being dead — you might have some doubts about the results.

So much is thrown into the mix, if you don’t like one twist there is another to come shortly. The cold-hearted, bitchy sexpot, Julie, becomes more important to the men than the money or their state of well-being. Chabrol even gives the justice system a well-deserved scolding, saying the reason for the vagaries in justice for women, is because the law was created by men for men. The film begins in irony and ends in irony. Even the police seem a little smarter for their effort. 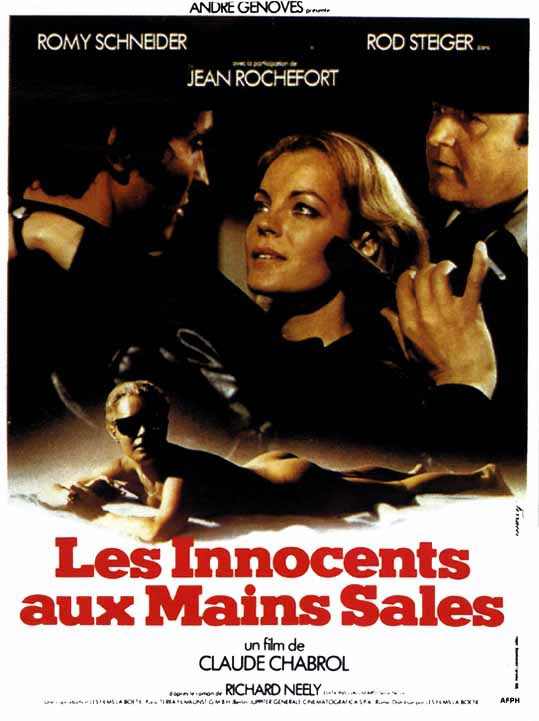