“It’s a blend of Western and sci-fi film, and doesn’t work for either genre.”

The only film directed by Jacques Marquette is a bomb. It’s a blend of Western and sci-fi film, and doesn’t work for either genre. This tawdry low-budget film was scripted by Ray Buffum. It played on a drive-in double-bill with another cheapie, The Brain From Planet Arous, and was the lesser film of the two.

The action is set in 1880, in a small Western town. In an abandoned gold mine, prospectors Jim Cannon (Jim McCullough), his wife Ruth (Anne Gwynne) and their young son Charlie (Stephen Parker) are hoping to find gold. A meteor falls at the mine killing Jim and injures Charlie. Because of the radiation the teenager remains childlike and grows into a monster figure–hideous looking, hairy and brutish. Mom protects him and keeps him hidden in the mine. His condition is unknown to the locals, who think he also was killed by the meteor. Unaware of his own strength, Charlie kills sheep and cattle by just playing with them. One day Charlie (Gil Perkins) , now a teenager, escapes from the mine and kills a farmer because he wouldn’t let him pet his burro. Charlie is scolded by mom for running off unattended. Yikes. What a caring mom! Excitement comes to Ruth when she strikes gold in hubby’s mine. But that glee quickly turns to grief when Charlie kills another local. Ruth uses the money from the gold to buy the assayer’s (Gabe Mooradian) big house at the town’s edge, hoping that will tame her insane son. It also brings her into the town, where she begins a romance with Sheriff Bob Lehman (Stuart Wade). But Ruth’s plan in dealing with the disturbed Charlie doesn’t work and he kidnaps the waitress Kathy (Gloria Castillo).

From here on the film gets lost in its ineptitude and poor storytelling, as the obnoxious film looses all perspective and becomes one dumb movie. 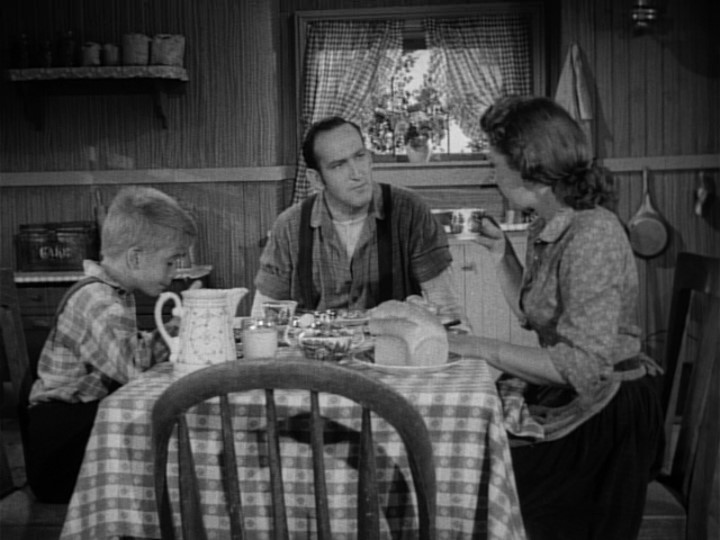