Gus Van Sant’s (“Paranoid Park”/”Gerry”/”Elephant”) sincere, gentle and at times engrossing mainstream biopic on Harvey Milk, who in 1977 became the first openly gay elected politician in a major city in America (as one of the eleven San Francisco supervisors) and was assassinated a year later in 1978 after celebrating his 48th birthday. The Milk story is an historical American story of breaking down barriers for a better and more tolerant America and of getting martyred for the cause, making him as worthy of being studied in school as any civil rights leader who strives to overcome a wrong. The effects of the assassination still resonates with the same fervor and urgency in today’s New America of Obama as it did back in the day of Moral Majority spokesperson Anita Bryant’s inspired hateful anti-gay politicking across the country, because the struggle for gay rights is a long way from having “a mission accomplished banner” unfurled in any government office building. This becomes evident on Election Night of 2008 when California’s homophobic Proposition 8 and its ban of gay marriage won, which tells you in an even more certain way than the film entertains that this country is a long way off in ensuring civil rights for gays.

Van Sant, to good effect, mixes in homemovies and newsreel footage to show some of the gay demonstrations, the police raids on gay bars and the Anita Bryant crusade against homosexuals. It’s done so seamlessly, that it’s hard sometimes to tell if it’s the movie or archival footage.

Though a praiseworthy film it’s unfortunately not a great one dramatically even if it’s an important and necessary one historically, and is done with taste and conviction. It follows a much too conventional tract as it veers too close to familiar Hollywood by-the-numbers formulaic filmmaking, nevertheless when it counts the most in the climax delivers some very moving moments of martyrdom (showing unforgettable images of the candle-lit procession following Milk’s death) and a heavyweight wallop in getting across its point that Milk can be compared to Martin Luther King as the gay community’s answer to the black civil rights leader who was also willing to risk dying for the cause. Milk is a charismatic political activist who came along at an opportune time to give hope to all those other so-called disreputable characters who were treated as second-class citizens. It’s hard to argue with that reasoning (even though it was a workplace crime that also included the slaying of the straight mayor) and easier therefore to accept Van Sant’s somewhat inspiring but mostly dispirited safe film, especially when it tells such a fascinating and poignant story that demands to be told to a wide audience for the movement to gain greater acceptance.

Its best asset is Sean Penn’s endearing performance as the irrepressible Harvey Milk, where he breathes life into his character by making him likable, believable and infectiously beguiling in his passion for the cause. Penn is magnificent as a people person who can reach out to both gays and straights, at least those without a bias. His political shtick on the campaign trail is to say such things to his community as “My fellow degenerates” and to outsiders introduce himself by saying “My name is Harvey Milk, and I want to recruit you.” His Method Acting shtick is in his unnerving queenly facial gestures and dainty hand movements, as he gives heart to a film that at times seems plodding. He carries the film on his back with his winning personality and his pragmatic confrontational tactics, as he morphs into the knight in shining armor taking on all these fascist types who want to do to the gays in America what the Nazis did to the Jews in Germany (which might be a reach, but in any case Milk’s point is well taken that the homophobes mean his people no good). For Milk, the most daring political act a gay person can do is to come out of the closet, and once he does that then the fight for freedom can begin in earnest.

Its noble aim, well-researched screenplay by the documentary filmmaker Dustin Lance Black, mostly outstanding ensemble cast offering top-notch support to Penn, and its way of capturing with seeming authenticity the climate of the times, are no small feats and even though Van Sant wears his heart on his sleeve to show on whose side he’s on he is nevertheless able to give a fair portrayal of the assassin when the easiest thing to do would have been to vilify him. The troubled Irish-American conservative colleague of Milk’s, Dan White (Josh Brolin), elected at the same time from his working-class area and pledged to support “family values,” an ex-fireman and ex-policeman and a married family man, killed Milk when overwhelmed with all sorts of incalculable pressures. He’s superbly played as a problematic uptight average Joe in a low-key but chilling way by Brolin, someone of limited intelligence who doesn’t really know himself and is all bent out of shape that his beloved city seems to be overrun with gays. The slow-witted White cracks when he feels betrayed over Mayor Moscone (Victor Garber) not rescinding his letter of resignation and opts to kill on the same day both the mayor and his perceived enemy Milk. Using the “Twinkie defense” White got a slap in the wrist conviction for manslaughter and was released after serving five years of a seven year sentence, only to commit suicide two years later.

The movie opens with Milk in 1977, making a tape recording of his life story to be played in the event of his assassination. In flashback one of the opening scenes is set in 1970, where Milk, a closeted buttoned-down suit wearing Wall Street insurance executive, will have his life change forever on his fortieth birthday with the pickup of the much younger casually dressed hunky hippie, Scott Smith (James Franco), in a New York subway station. After a subway kiss, it ends up with the two men naked while eating birthday cake in bed. Before you can sing out “I left my heart in San Francisco” the two are a couple in the Castro district, the emerging gay mecca in S.F., and with the enterprising liberated Harvey now in hippie garb and owning the Castro Camera Shop and becoming through self-promotion the unofficial mayor of Castro. Now deeply involved as a political activist for gay rights, Milk becomes the main man to see in the community when it comes to dealing with the gays–as even the teamster head comes to him to strike back at Coors.

It then goes into schematic details of Milk’s start in politics that covers him running for political office twice for the San Francisco Board of Supervisors and once for California State Assembly, and losing all three elections but becoming more political savvy with each election. Finally winning public office as supervisor for the newly zoned District Five that covers the hippie area of Haight Ashberry and the gay Castro section, but the price of this success means the apolitical and disapproving Scott leaves him and his new lover boy is the unstable footloose Mexican named Jack Lira (Diego Luna) who is at odds with Harvey’s inner circle and demands with tragic consequences the workaholic Harvey give him more time. Luna’s strident performance threw things a bit off-kilter.

Milk’s major battle is with California State Senator John Briggs (Denis O’Hare), who is supported by the Christian right-wing and sponsors Proposition 6 seeking to ban gays from teaching in California public schools. Leaders from all sides of the political spectrum ban together to get this proposal defeated–which stands as probably Milk’s greatest accomplishment while in office, as he took on Briggs in a series of debates and tirelessly rallied his forces to go to the polls.

The gregarious and extroverted Milk surrounded himself with loyal gay political supporters such as the zany animated hustler-cum-activist Cleve Jones (Emile Hirsch) and his able lesbian campaign manager, Anne Kronenberg (Alison Pill), the only woman in his male entourage. Influenced by Milk’s spirited grass-roots politicking, his many supporters have been inspired to action for the cause by their upbeat leader.

This Hollywood film is timely, informative, necessary as food for thought for the ongoing struggle and of particular value to the younger generation not familiar with the sensational Milk headline story. It owes much to the award winning 1984 documentary of Rob Epstein’s The Times of Harvey Milk, and it’s solid enough to make a worthy companion piece. 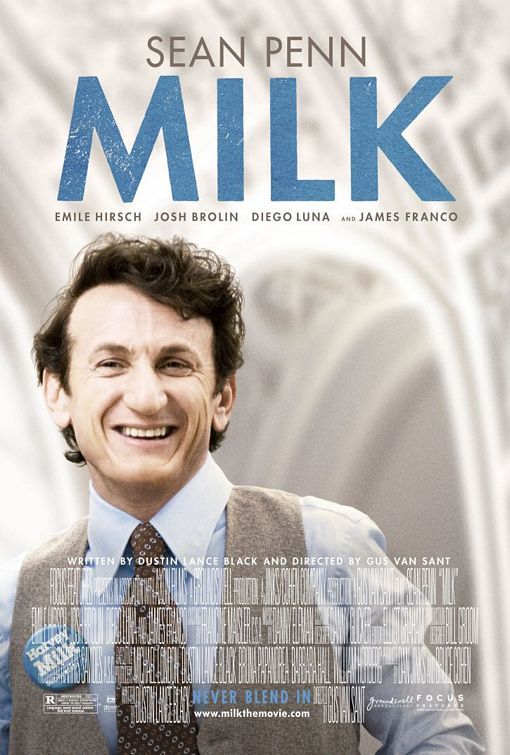