“Donald Sutherland’s menacing performance as a corrupt sleazy blackmailer private detective, gives the film all the props it needs.”

Upstart workaholic straight-arrow architect Scott Reinhardt (Tim Matheson) has a pretty wife Julianna (Felicity Huffman) and two small children, where he lives happily in a beautiful home in the Hollywood Hills. His partner in their architect firm, Charlie Groves (Timothy Carhart), bribes an LA city commissioner to get a big architectural job bid. This leads crooked Vice Squad cop Towers (Jay Acovone) to stop Scott late at night on Mulholland Driveand blackmail him for $5,000 in hush money. They tussle and Towers is accidentally killed when he slips on a rock and his head is bashed in. The next morning’s TV news reports that Towers died from a bullet to his head. Soon Scott encounters the sinister Murdoch (Donald Sutherland), who shakes him down for a $100,000 to coverup the bribe and murder. Murdoch says he has the audio tape of Towers witnessing the bribe of the city official and with that evidence the cops would have the motive for the murder if he should turn it in. A harried Scott sees no easy escape from this mess and adjusts to becoming an animal like Murdoch to survive, as in the end he learns why Murdoch knows so much about him and figures out a way to get Murdoch out of his life. Scott’s solution to his problem is amoral, to say the least, but it leaves him in the clear though not with a clear conscience. 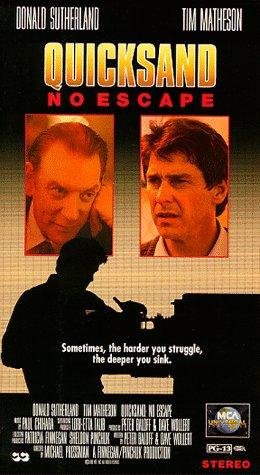