This is an authentic “Dogma 95” film. Before the film opens that assurance comes with a signed guaranteed shown on the screen that it was made according to the rules stipulated by the Danish directors who founded this school of sparse filmmaking — Lars von Trier and Thomas Vinterberg. The hand-held camera was obvious throughout the film as were the film’s lack of special effects, supposedly giving the viewer a chance to discover on their own any beauty worth finding in the film. Whether by adhering to their “Vow of Chastity” of filming only on location and only with natural light has made this a better film, is doubtful. Like all dogmas, they eventually wear out whatever usefulness they might have had in the first place.

Soren Kragh-Jacobsen’s “Mifune” is Dogma’s third approved project, after Vinterberg’s “Celebration” and von Trier’s “Idiots.” It is the weakest of the three, but still it has some punch in a conventional way due to the film’s technical clarity. It is a playfully weird telling of a familiar Hollywood type of a romantic comedy situation. And, it also had a certain intrinsic beauty about it that kept it afloat and made it seem better than its slight story.

It is, nevertheless, a surprisingly conventional work, which makes me wonder about all the fuss this Dogma 95 group goes through to give the impression that they are radical filmmakers. They have chosen a trite subject matter, especially, for a group that I would have thought to be more politically motivated.

The film opens with Kresten (Anders W. Berthelsen) marrying a rich girl, Claire (Sofie Grabol), whose father owns the firm where he works. When the father toasts the couple and wishes them all the best and Kresten says this marriage will last forever, based on film history of such scenes — his fall is inevitable.

We see the couple f*cking and Claire loudly screams in bliss as she straddles Kresten; she seems to be having one of the greatest f*cks ever. The next morning Kresten receives a call from Gerner (Anders Hove), a neighbor of his father’s, telling him that his father just died. Claire says he didn’t tell her he had a father or a brother, and that he was raised on a farm as a peasant. He tells her he will be back in Coperhagen in a few days after he buries his father and sells some items in the house. Then he takes the family BMW, and he goes by himself. Now I would have bet anyone in the theater and have given them 10-1 odds that was the last of the marriage, that’s how obvious it was.

Kresten returns to his peasant roots in the deteriorating farm he lived in with his cretin brother. He again breathes the air where his dispirited father raised him and where the bitter-sweet memories of his mother who hanged herself when he was a child lingers. To remedy this untenable situation, since his brother is not mentally capable of taking care of himself and he doesn’t want to place him in a mental asylum, he hires a housekeeper, Liva (Iben Hjejle), who is from the city. The housekeeper is real attractive but she has a secret, just like Kresten. Her secret is that she is a prostitute. She tells herself she is only a prostitute to support her boarding school brother Bjarke (Emil Tarding), so that he can have a better life than she has.

Claire has recently received threatening calls from a psychopath, who says he is going to get her. Unduly frightened as the psychopath gets her number everytime she changes it, she decides to flee from her residing whorehouse and replies to Kresten’s ad.

At this desolate farm, Claire is cautiously attracted to Kresten and gently handles the strangeness of Rud (Jesper Asholt) with a simple understanding smile. The mentally impaired brother is the source of all the comedy — telling her there are aliens around here.

To make a long story short, Claire comes barging in one night to the farm and discovers all the lies Kresten told her about being an orphan and is horrified at what she sees. She thereby decides he is a peasant psychopath and takes back the BMW, further telling him he no longer works for the firm and he will receive the divorce papers to sign in the morning. Evidently, good sex is not enough to salvage this marriage.

The screw ups, Kresten and Liva, are a perfect match for each other; but, a number of misunderstandings must come between them before they can cement their relationship.

The moral of the story is that you can’t run away from who you are and that true love wins out over a status-symbol marriage. Hardly radical messages. The film got its title from the famous Japanese movie star Toshiro Mifune, whom Kresten aped when he dressed up as him ever since childhood. He playfully teased his brother that the samurai warrior lived hidden in the cellar of the house. This Dogma 95 film left me unmoved, though its story was well-crafted. It just felt too much like an art-house film designed to please a middle-brow audience. It never seemed provocative. 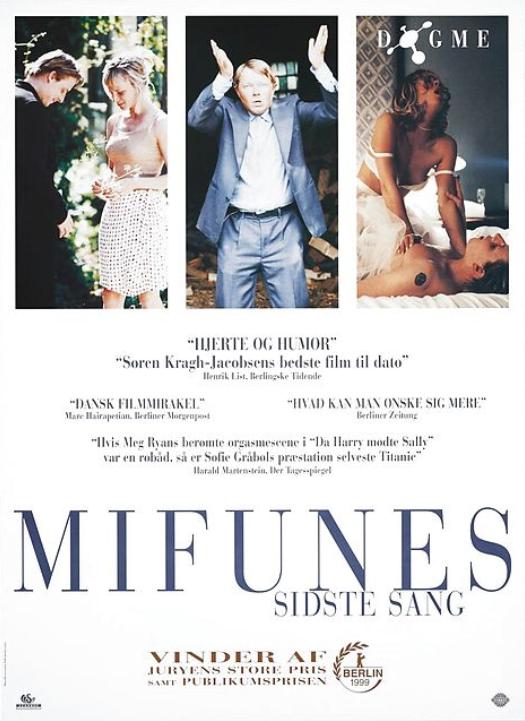 LOST CITY OF Z, THE