“This documentary, taking 12 years to complete, is a moving tribute to a biting, satirical comedian who became an American icon …”

This documentary, taking 12 years to complete, is a moving tribute to a biting, satirical comedian who became an American icon and self-destructed after blasting his way to success through the myriad nightclub venues on the Left and Right coasts of America in the 1950s-and-mid 1960s. What seems apparent, is that there was a vendetta to get him by law enforcement people across the country and that he was unfairly treated. He was labeled as a “sick comic,” which turned out to be both good and bad. He had a wide audience that was ready for him but he also made many enemies, those with small minds who hated him with a passion for so openly ridiculing many of their “sacred cows.”

Lenny’s story begins in Long Island, N.Y., where he was raised primarily by his divorced mother, Sally Marr (She died in 1997). She was a free spirit working as a bartender, house-cleaner, and dance instructor. She brought Lenny up to be guilt-free and independent and to be a not-so-nice Jewish boy, even taking him to strip shows when he was a teenager. While at the beauty parlor she is interviewed, providing anecdotes, snapshots and home films. She recalls how he was a quiet child who could have fits of melancholy, but was a happy-go-lucky person most of the time.

After joining the navy during WW11 and getting discharged under a mutual agreement the showbiz bug bit Lenny and he honed a safe but eccentric comedy act, mainly doing impersonations of stars like Bogart. In the early ’50s, Lenny got his big break on the Arthur Godfrey show and pleased Arthur with his clean act. From this TV show came bookings to clubs across the country. Soon Lenny got married to a stripper named Honey which resulted, reluctantly for him, in a child (Kitty) born in 1955. By this time Lenny was undergoing a transformation, hanging out with the band, working in burlesque houses where dirty jokes were the norm; he was getting into booze and drugs, which were common recreational pleasures for a lot of the performers in these places.

In the dives and strip joints Lenny liked to work, he changed his act nightly making it topical and dirty. He also made what he calls a Z-film with his wife and friends, a funny low-budget crime film that showed he basically was like the other comics willing to do anything for a laugh.

Now living in Los Angeles, Lenny was also experimenting with harder drugs such as speed, cocaine and heroin, and got involved in some sex orgy scenes in his house gatherings. All this helped make his marriage come apart. Honey thinks he fully dedicated himself to his work after she walked out on him, just so he could show her what a mistake she made. Lenny wanted her to see him become a big star and regret that she left him. As his act started to tackle subjects that were not common material for humorists in the late-1950’s such as, taking on organized religion, talking dirty, and making his comedy act about sexual obsessions, racism, drugs and the lack of American culture, he became both popular and controversial. This prevented him from appearing on TV, at a time when that was the place to get the most recognition. There is a rare TV clip from a not aired Steve Allen show, where he tries to clean up his act for the TV audience keeping obscenities out of his cutting-edge jokes.

It is easy to say now, after viewing this intimate portrayal that Lenny was someone who was way ahead of his time and fearless in sticking up for what he believed in. And that, even though, Lenny had the comedian mentality of just going after the laugh he was still able to develop into being something more than your typical comedian. Unfortunately, he couldn’t control the demons inside and outside of himself, and succumbed to the growing pain that was driving him to make wrong-headed decisions in his short-life span.

The interviews with Honey, Lenny’s friends, his lawyer (Garbus) and his outspoken mother, all say that he was someone who was deteriorating rapidly as he fought the court system during the last two years of his life. Lenny’s battle with the courts is a heartbreaking story of injustice. It became Lenny’s obsession and caused this once slick hipster to sadly be seen losing his cool demeanor. It started with a false arrest in Philadelphia (1964) for taking amphetamines, which he had a legitimate prescription for. Robert De Niro, the narrator, believes that when Lenny exposed a bribe to drop the charges naming the judge involved, that is when police departments around the country repeatedly arrested him on obscenity charges and Lenny became a marked man. Lenny felt, “It has become chic to arrest me.” This was the beginning of the end for him, as clubs were closed down that booked him and he just couldn’t get gigs anymore; and, ultimately he became a broken man who sadly pleaded with a judge: “I so desperately want your respect. Please don’t lock up these words.” His final blow came in NYC, at the Cafe Au Go Go, when Frank Hogan, the district attorney, charged him with violating an ancient law on the books about obscene language. Lenny was convicted of this misdemeanor and sentenced to 4-months jail time and a thousand dollar fine. This ruling was reversed by a higher court, but it came too late for Lenny. He died in 1966, at age 40, from an overdose of heroin. 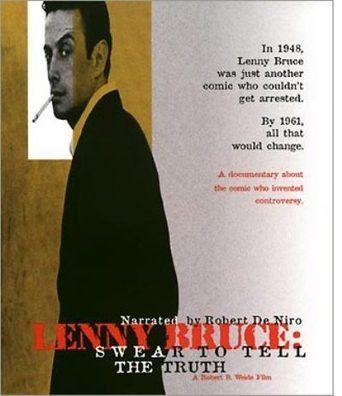