“Despite a sloppy script has its pleasant idiosyncratic moments thanks to The Three Stooges and a devilishly cute musical number with almost bare coeds singing in the shower.“

A dumb comedy hodgepodge that despite a sloppy script has its pleasant idiosyncratic moments thanks to The Three Stooges and a devilishly cute musical number with almost bare coeds singing in the shower “Clean as a Whistle.” Director Walter Lang (“Desk Set”/”Mother Wore Tights”/”The King and I”)seems lost at sea in all the silliness. While the host of writers, Herman J. Mankiewicz, Norman Krasna, Allen Rivken/Arthur Kober, William K. Wells and P.J. Wolfson, never get a handle on this mess.

Baron Munchausen (Henry Kolker) is a famous German explorer and big game hunter in the jungles of Africa. Julius (Jack Pearl), a former pants presser, and Joe McGoo (Jimmy Durante), a former sailor, are his servants. The lost and parched servants thinking their Baron died in the jungle after reading his nasty farewell letter, are rescued by a safari. The boys pretend that Julius is the Baron and Joe is his manager, fearing otherwise their rescuers would desert them if they knew their real identities as unimportant people. The phony twosome are given a Lindbergh-like hero’s welcome in NYC, where Julius is hired to speak on the radio and is paid by the word. After delivering a nonsensical talk, the hero pair are then welcomed to deliver a lecture on their adventures at a women’s school, Cuddle College, run by the haughty Dean Primrose (Edna May Oliver).

The Baron becomes smitten with the maid ZaSu (ZaSu Pitts). Meanwhile the dean has to call on the janitor (Ted Healy) and his helpers–Moe, Larry and Curly (The Three Stooges)–to fix the plumbing. Their comedy antics become the film’s highlight, and liven up the silly comedy with some refreshing silliness. When the real Baron returns from Africa to expose the frauds, the frauds outmaneuver him. Thereby Julius wins the girl, even when she discovers he’s a fraud, and he also manages to get a radio gig posing as the Baron. 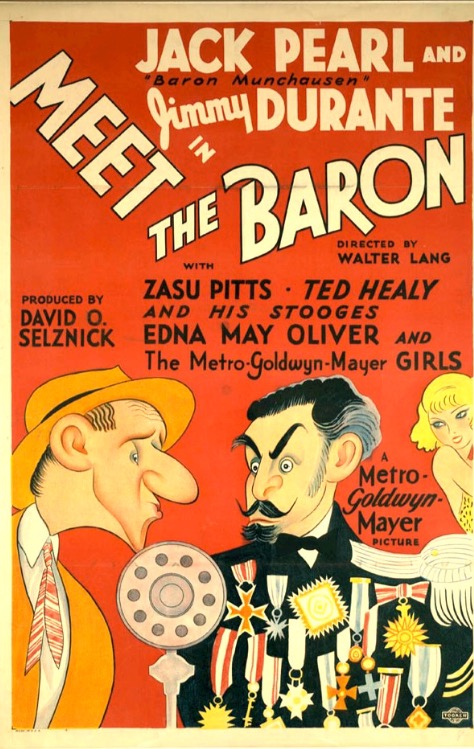