A competently made and acted biopic on the Dutch artist Vincent Van Gogh (Kirk Douglas), that’s nevertheless uninspiring. Director Vincente Minnelli (“Two Weeks in Another Town”/”Kismet”/”Bells Are Ringing”) bases it on the screenplay by Norman Corwin and the fictionalized novel by Irving Stone.

In 1878, the misfit Van Gogh leaves Holland to preach for his church society to coal miners in an impoverished Belgian province. After a year he’s been dismissed by the church society for identifying too much with the miners. He’s found living in squalor by his art-dealer brother, Theo (James Donald), and is persuaded to return to Holland to recuperate. Now preoccupied with art, he leaves his parents’ house and lives in the Hague with a prostitute (Pamela Brown). When Van Gogh joins Theo in Paris, he meets the great artists of the Impressionist movement and is befriended by Paul Gauguin (Anthony Quinn). Later on in Arles, he will once again meet up with Gauguin for some lively chats.

It shows the troubled artist wracked with an inner pain and tension, and his development as a great artist despite his life struggles with poverty, loneliness and not being recognized. Minnelli lets us see onscreen some 200 of the master’s works, and lushly paints the screen with the same colors Van Gogh used in his paintings. It takes us to the tragedy in 1890, in Auvers-sur-Oise, when the despondent 37-year-old artist dies of a self-inflicted gun shot wound.

Douglas, who looks like the self-portraits of Van Gogh, gives one of his more intense performances of a man who can only explain himself through his art. It earned him an Oscar nomination for Best Actor. While Quinn in only a brief role, won his second Supporting Actor Academy Award. 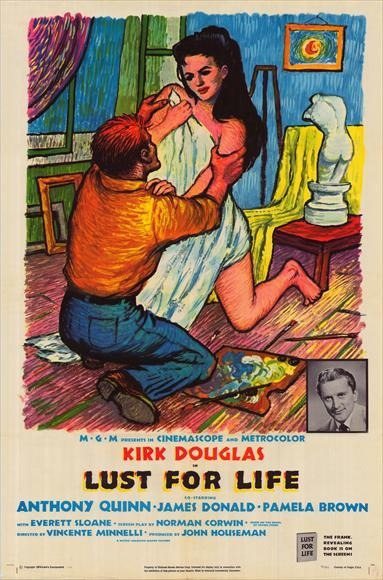