“It was hard to stomach.”

Vintage syrupy Frank Capra (“It Happened One Night”/”Mr. Smith Goes to Washington”/”It’s a Wonderful Life”/”Mr. Deeds Goes to Town”) schlock about the virtues of the common man. It plays as a populist feel-good over sentimental inspirational message for Americans to pat themselves on the back on their wonderful philanthropic nature and counteracts the pro-Nazi Fascist forces present in America at the time in the form of the Bund movement that filled the public with lies to break the American spirit. It’s meant as a serious socially-conscious film and is Capra’s first independent film production (in partnership with writer Robert Riskin) after leaving his bittersweet association with Columbia’s despotic studio head Harry Cohn. It’s based on the Richard Connell & Robert Presnell Sr treatment of Connell’s 1922 Century Magazine story titled A Reputation.

The Bulletin newspaper is renamed The New Bulletin when taken over by right-wing oil tycoon D.B. Norton (Edward Arnold), who has presidential aspirations, and gruff managing editor Henry Connell (James Gleason), who initiates a downsizing. Cheeky good looking reporter Ann Mitchell (Barbara Stanwyck) is one of the workers fired and after unsuccessfully begging Connell to keep her on at a pay cut turns in her last story. It’s an imaginary letter written by a poor soul who says he’s going to jump off the top of City Hall on midnight on Christmas Eve in protest to the rotten state of the world and signs it John Doe. The letter gets the attention of the local politicos and the public gets suckered into falling for the fabrication big time. It sells papers, and Connell hires the cynical reporter back with a big fat pay raise to serialize the story even after she tells him there’s no John Doe. When the rival paper the Chronicle says the “letter” is a crock, Ann holds an audition among the bums for the part and hires a starving former minor league ballplayer turned hobo named Long John Willoughby (Gary Cooper) to play John Doe. Happy to get some eats and be put up in a fancy hotel, the tramp agrees to go along with the fraud and brings along for company his reluctant dye-in-the-wool colorful hobo traveling partner named the Colonel (Walter Brennan).

John Doe makes radio motivational talks, ghost-written by Ann, where in his common man vernacular and homely spun aphorisms he advocates charity, kindness, and being a good-neighbor. These good will talks turn Doe into a popular national figure, and ‘John Doe Clubs’ sprout up all across the country. Norton attempts to piggy-back on Doe’s popularity to get elected to the White House by sponsoring the clubs for his own secret purposes and when elected president plans to bring about a fascist government. But when Doe learns of Norton’s evil intentions through forming a third political party, he at first agreed to back, he threatens to go public and confess to his charade. It concludes where Doe almost commits suicide after destroying Norton’s political ambitions, but is talked out of it by the good people who joined his clubs and therefore his faith in the goodness of the human spirit is restored,. By the way, there’s a love story cooking between the former tramp and the reporter.

It was hard to stomach or believe Cooper as the hick Messiah, or buy into Capra’s muddled idealism. In fact, I found it to be mostly a crock and a bore, with only an occasional high spot to counter all the foolish chicanery and jazzy talk about the good ole ordinary folks having too much common sense to be fooled by a charlatan. 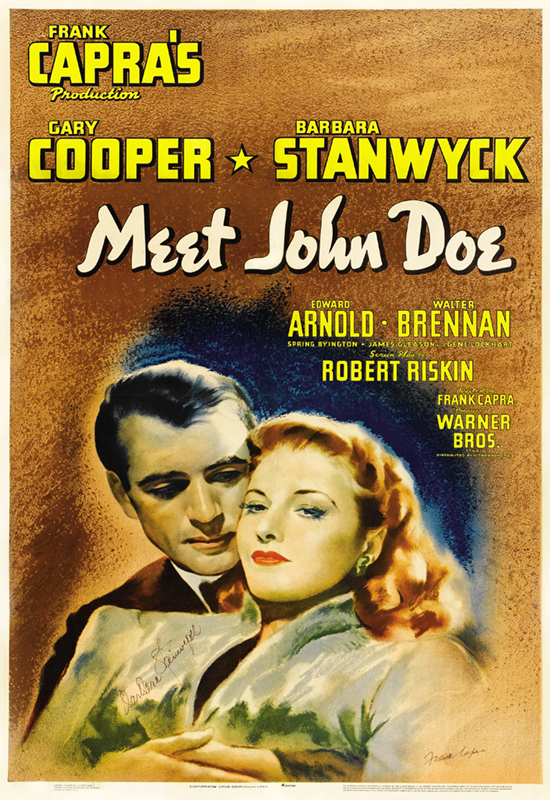