“It’s only distinction being it’s the best film ever with Jive in its title, beating out the 1976 Jive Turkey by a country mile.”

A cheesy out-of-tune B-film wartime jitterbug musical by iconoclastic Austrian-born filmmaker Edgar G. Ulmer (“Murder Is My Beat”/ Bluebeard”/ “Detour”) set in Pasadena, California’s Clinton High School. It’s only distinction being it’s the best film ever with Jive in its title, beating out the 1976 Jive Turkey by a country mile. The story is written by a very young Irving Wallace, Walter Doniger and Malvin Wald from a story by Walter Doniger & Malvin Wald.

Ex-Our Gang member Dickie Moore stars as the nerdy goody-goody NYC conservatory teenage musical prodigy Peter Crane, who transfers to a traditional California public high school. Peter is saddened when he learns his officer father was killed in action overseas. To entertain the wartime troops stationed in the area, Claire Emerson (Tina Thayer) organizes an all-girl swing band and gets Peter to be the conductor. The kid has a few pangs about trading in Bach for jive, but wants to be a patriot and is too young to join the service. Peter encounters Maglodian (William Halligan), a caretaker crony of his father, and he paves the way for the kids to convert the unused farm estate’s barn into a G.I. canteen named Jive Junction. Soprano singer Gerra Young is showcased as the lead singer. Peter’s arrogant attitude in class has all the male students seething with anger at him, and when because of him the soldiers steal all their girlfriends–the boys give him a black eye. Peter then schemes to redeem himself, and it culminates in him entering the high school band in a national contest that brings everybody back together on the same team as they perform on the winning band.

This flag-waving, peppy teenage film that favors boogie-woogie over classical music and silliness over any kind of noir story and sets a casual lighthearted mood instead of an expressionistic mood the filmmaker is noted for, didn’t seem to be a good fit for the more somber, sophisticated and “longhair” music favoring Ulmer. 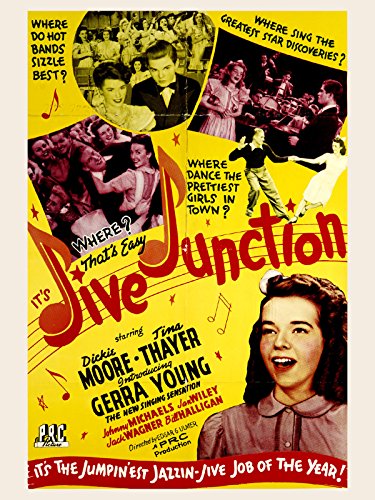