May is a gross-out horror tale by USC film school educated writer-director Lucky McKee, in his directorial debut. It’s about a lonely young woman who assists the veterinarian during surgery at an animal hospital and becomes increasingly more violent and out of touch with reality. It’s effective for setting up a lingering creepy mood, but the story itself failed to go further than the set-piece shocks it aims for. The main character is not developed, but just plods along speaking in a robotic manner and acting clumsy until she goes into her lunatic serial-killer mode and at that time inexplicably displays great calm and wit. It held my interest for about half the film, but in the end it lacked the staying power to become more than just another weird cult movie. Though, it’s slightly better than the usual slasher flick because of the studied script and the star’s endearing performance, and the way it let the eerie mood spell out its psychological story without exploitation or special effect gimmicks. But it never made that story thought-provoking, as it could never get past keeping it all within the conventions of the genre.

The film opens as a young May Canady (Angela Bettis) wears a pirate patch because she has a “lazy eye.” Her classmates use this as an excuse to ostracize her. At her birthday mom gives her a special doll she handmade as a child, but warns her to never take the doll out of the glass cabinet (Don’t ask why!). Mom’s attitude about her daughter’s lack of friends is, “If you can’t find a friend, make one.” May follows mom’s advice and talks to the Suzie doll regularly. It’s an affecting performance by Bettis that stretched the limits of camp without exceeding the boundaries, as her May character is believable as a strange child who suffers from loneliness and possesses no social skills.

The film skips to when May is a shy twentysomething with a simpering smile, who works as an assistant in an animal hospital. She is curious about people but finds them to be alien creatures, as her loneliness sticks out like a sore thumb. She laments that she finds perfect parts rather than the whole being perfect while eye-balling a young man on a city bench, and she will later have a chance to reaffirm that belief. At a coffee shop she impulsively caresses the hand of her handsome neighbor, Adam Stubbs (Jeremy Sisto), who has been napping at the table. She has fixated on his hand as being the best part of his body. Upon meeting Adam, May says “I’m weird.” He replies, “I like weird. I like weird a lot.” He’s a college drop-out and an aspiring filmmaker, who invites May to his room to see a sleazy film he shot called Jack and Jill. It’s about a couple that starts off gently kissing at a picnic and then things become bloody as the kisses turn into cannibalism. When May is asked for her comments following the screening, she says “I don’t think that she could have gotten his whole finger in one bite, though. That part was kind of far-fetched.” After her film review she attacks Adam with the same type of rough kisses, but the weird filmmaker becomes ruffled and asks her to leave. He realizes he has met a real loony and doesn’t know how to handle her. At one point, he tells the gullible May he’s off to see a revival of Dario Argento’s horror film Trauma. He further amusingly dumbfounds May by snobbishly saying, hasn’t everyone seen this movie? On Adam’s answering machine, the message he leaves after the beep is a bloodcurdling scream from a horror movie. Well, the viewer better like weird, because that’s a cue for the direction the campy film will now go.

When May proves to be too weird for Adam’s take on weird, he dumps her. She then takes solace in being lured by Polly (Anna Faris), a lesbian vamp who works as a file clerk at the clinic and has a nice neck. Polly’s lesbian partner Ambrosia has Betty Grable-like gams, and can’t see what her mate sees in this weirdo. But Polly like Adam, finds she’s no match for May when it comes to weirdness. The tone becomes darker as May’s intense relationships with her new friends are not reciprocated with an equal fervor, and her disturbed mind cracks as she hears voices that seem to be coming from Suzie and are leading her to do grisly things. By the film’s end, all the black humor acts to reinforce a parody of classic horror films such as “Carrie” and “Frankenstein” and “Repulsion.” McKee is obviously an enthusiast of the horror genre. Though this film has many worthwhile aspects to it highlighting his love of films, I didn’t find that I really enjoyed or felt captivated by it in any special way. 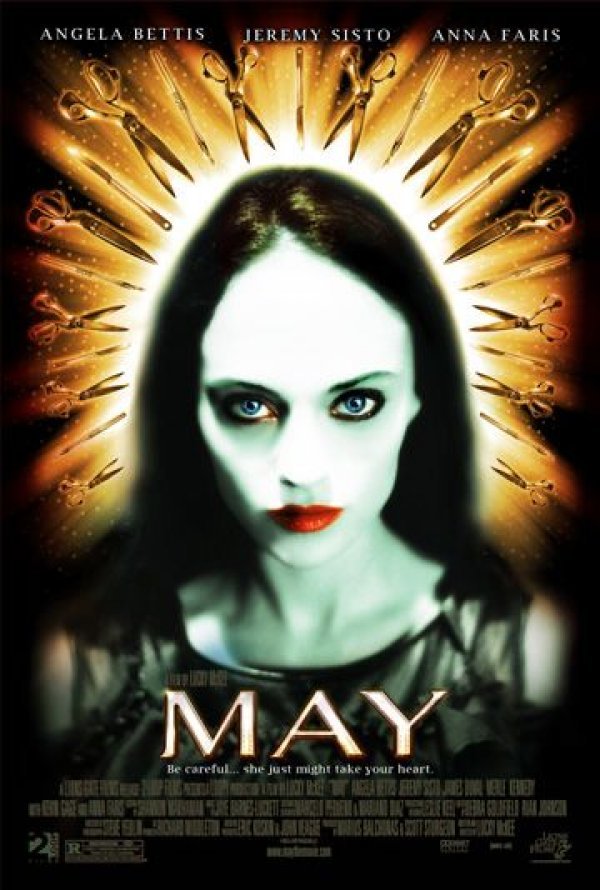