The title is a magician’s term that refers to the climactic surprise that tops off a successful trick in its third part, such as after making a man miraculously disappear then in the last part bringing him back. Christopher Nolan (“Memento”/”Batman Begins”) directs this emotionally cold thriller of two warring 19th-century London theatrical magicians, Robert Angier (Hugh Jackman) and Alfred Borden (Christian Bale), who are obsessed to be the best magician in town. It follows in the shadow of another recent film about 19th-century magicians by Neil Burger called The Illusionist. It’s a tale of love, revenge, jealousy and betrayal, with a subplot involving a mad-genius Serbian American pioneering electrical engineer Nikola Tesla (David Bowie) working in secret in Colorado Springs with high-voltage coils that toss around lightning bolts as the scientist is in the pursuit of bringing free electricity to the masses and making a secret magical box for the wealthy magician Angier. The subplot seemed like so much padding, but any tale about the fascinating mysterious Tesla would have been better than this mostly uninspiring one. History tells us there was a rivalry between the more pure-minded Tesla and the more business-minded Thomas Edison that can be loosely compared to the competition between Angier and Borden’s for dominance.

Nolan cowrote it with his brother Jonathan Nolan; it’s based on the novel by Christopher Priest. Though mostly a leaden affair, it has its few diversionary magical moments. It’s sleight of hand over substance; it takes its magic so seriously that the psychological thriller leaves a grave air lingering that it can never recover from, especially when the ending as expected is a surprise but not a very pleasing one or enough of one to warrant its over two hour length.

The upper-class Angier and the brash introspective working-class Cockney Borden, known as the Professor, are young ambitious London apprentice magicians who start out as friends working together for a stage illusionist (played by real-life magician Ricky Jay). Their main act calls for them to bring up volunteers from the audience to bind the lovely assistant Julia (Piper Perabo), who is Angier’s wife, and she will be lowered by rope into a padlocked water tank from which she escapes. During one performance Julia doesn’t escape and dies in the water tank. Angier blames Borden for the accident, claiming he might have tied a double knot she couldn’t slip out of. From hereon the two go their separate ways as bitter rivals, with Angier bent on revenge and finding out the secret to Borden’s Houdini-like piéce de résistance. Both are obsessed with one-upmanship and never trust each other. Showmanship is Angier’s gift; while for Borden, who is a purist, it’s the trick itself that matters and not to please the crowd.

The heart of the film covers a murder trial and the jailing of Borden who is convicted of murdering Angier and sentenced to be hanged. During the trial and imprisonment flashbacks within flashbacks are used as a misdirection device to keep the audience tuned into the expected final magical act, “the prestige.”

Scarlett Johansson plays the assistant Olivia, who is at first the love interest of Angier then becomes Borden’s. Her acting is decent, but her period costumes are more interesting than her performance. Rebecca Hall plays Sarah, the wife of Borden, who bore him a little girl he dotes on, and is irked that he’s more interested in his career than in the marriage. Michael Caine is the crusty wise old man Cutter, who tells us the tale. He’s Angier’s best friend, engineer, illusion designer and manager, who tweaks us with the story of magic by telling us things we should know about the craft but never telling us the whole story so we are still the suckers in the audience being played as the supposed magic will unfold on the screen.

The main story, filled with too much of the “nuts and bolts” of magic, never captured my interest as much as the unnecessary subplot did, as the magicians were too self-centered and unappealing for me to care about either. For me, the magic was when Tesla makes a field of large lightbulbs become illuminated without apparent benefit of wires or generators and not in the gimmicky cluttered narrative that was about as dull as watching a real magical show in Las Vegas. 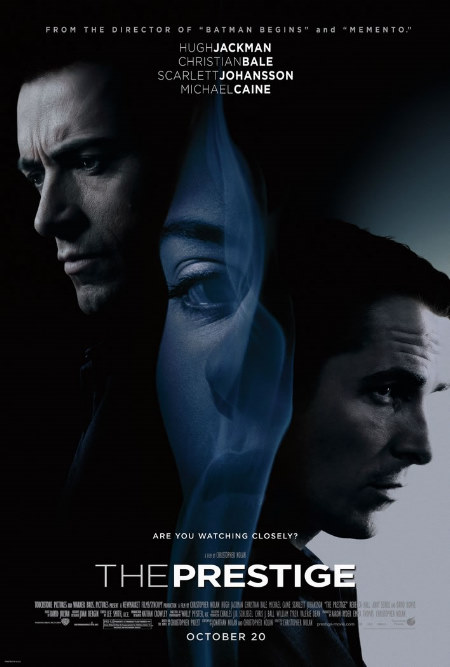